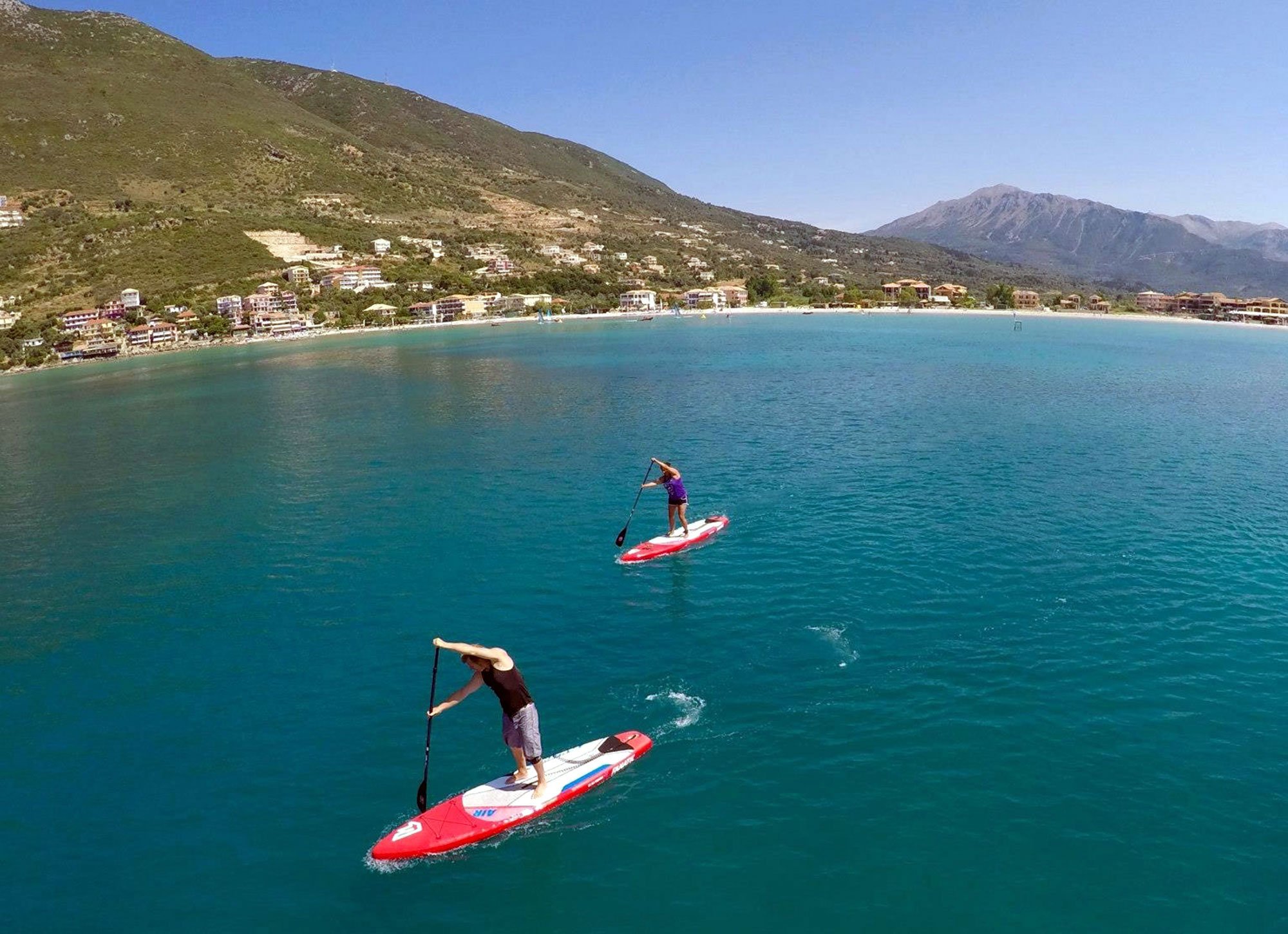 Having first got into the sport in the early days of British SUP back in 2009, Elisa and Duncan have been professionally teaching stand-up paddleboarding in Essex since 2013 – at Paper Mill Lock on the River Chelmer (east of Chelmsford) since 2014, and at Two Tree Island, Leigh-on-Sea, the year before that. You might well have seen our yellow VW campervan wherever there are paddleboarders! The husband and wife team are both BSUPA Level 2 (Race & Tour) advanced qualified instructors, DBS checked, and have successfully taught well over 1,000 people how to SUP through the years. SUPsect’s third instructor, Trevor, is BSUPA Level 1 and St John first aid qualified, plus he brings a wealth of invaluable experience from a career of safety management. While our fourth BSUPA Level 1 qualified instructor, Ian is SUPsect’s most naturally talented paddler known for his unrivalled SUP style. SUPsect is an official BSUPA school.

We also run Essex’s biggest and longest established SUP Club every Wednesday evening throughout British Summer Time – out and about at various locations all over South Essex from Chalkwell to Hullbridge to Papermill Lock to Two Tree Island to Shoebury… Formerly El and Dunc ran both the school and club for several years in the name of a boardsports store who rented us the school kit, but in order to operate more effectively from late 2017 we went fully independent and rebranded our paddleboard school and club to SUPsect: Stand-Up Paddle South Essex Club & Tuition. We are happy to be an approved and affiliated BSUPA school.

SUPsect’s chief instructor Elisa certainly knows how to teach, having qualified as a post-graduate (PGCE) teacher in 1997 she remains fully DBS checked. Formerly an accomplished horsewoman and competitor, El started stand-up paddleboarding as an alternative to equestrianism in the early days of British SUP and hasn’t looked back since! It’s hard to believe these days, but initially El was quite wary of the water – which gives her great empathy with many of our more nervous students – and having tried windsurfing, surfing and sailing with some success she certainly wouldn’t then have described herself as a waterbaby! But SUP proved a perfect fit as it offered a far less intimidating and much more controllable route into watersports, and within her first summer of paddling El had completely banished any fears and was loving life on the water. These days she will happily take on the very toughest conditions we find here and has got into SUPsurfing on trips away too. Although racing isn’t currently her drive, she has secured podium finishes at national level race events and coached Dunc towards his successful 2017, 2018 and 2019 race seasons and beyond. In 2019 El ran the junior and novice racing at the country’s biggest ever SUP race, the British SUP Club Championships – she is also Race Director of our regular leg of the EASI (East Anglian SUP Initiative) winter race series, and runs our regular free Race Clubs throughout summer in the run-up to the British SUP Club Champs where SUPsect finished 2nd overall in 2019. Aside from spreading the joy of SUP to students on our Learn to SUP and improver courses, El most enjoys recreational paddling with our many friends from SUP Club and exploring UK waters for fitness and fun.

School manager Duncan has worked within the watersports industry for over 20 years – initially as a windsurfing instructor, then as an editor on windsurfing, surfing, sailing, rowing and SUP magazines. He started stand-up paddleboarding back in 2009, soon after the first boards hit the UK, and quickly migrated from a windsurfing addict to SUP addict. Surf is of course a major drive for him and, having previously lived in Devon and the South Coast, Dunc loves to get into the waves when he can – but realistically now on the British east coast that’s a relatively rare opportunity, so flat-water racing has become his driving force. Duncan was bitten by the race bug at the first British SUP Club Championships back in 2013 and gradually improved his technique and fitness to become truly competitive on the national race scene to claim UK podium places in 2016. Then in 2017 he focussed his attention on the newly formed UK ultra-endurance series where he first took his inflatable 14’ Red Paddle Elite to 5th overall (1st iSUP) in the 50km Thames Ultra, then outright won the 2-day 70km Norfolk Ultra. In 2017 he also won the iSUP class at the 15km Battle of the Thames and 20km Big Ben Race, as well as the BSUPA SUP Club Champs. Having won the first big race of 2018 as overall 12’6″ champion of the prestigious Battle of the Thames, and then finished 3rd overall (1st iSUP) in both the Norfolk and Thames Ultras, 2018 was focussed towards the world-class 220km SUP 11 Cities in Friesland, The Netherlands. Dunc finished in the top 10 masters worldwide with an impressive overall time of just over 25 hours across the 5-day event. In 2019 Dunc set his sights on winning GB SUP distance and UK SUP endurance national tours. On the GB SUP circuit Dunc won the 12’6″ category at the Head of the Dart, Battle of the Thames and Paddle in the Park to secure the national distance title – plus while it really wasn’t his goal, he also paddled to 2nd place in the 12’6″ technical series! On the UK SUP endurance tour, he was 3rd overall and 1st inflatable in the 2-day 70k Norfolk Ultra, outright won the 45km Thames Ultra, and finished 5th overall for 1st inflatable at the gruelling 2-day, 92km Great Glen Challenge. Hence Dunc ended the year a double national champion: GB SUP 12’6″ Distance Champion and UK SUP iSUP Endurance Champion.

SUPsect instructor Trevor is a former PADI open water diver, who completed over 200 dives all around the UK to complete his advanced open water and nitrox diver certificates. He’s also a competent kayaker who has spent many years paddling our local spots, which gives him a deep understanding of local tides, weather and conditions. Trev brings a wealth of safety knowledge to SUP gained from diving, kayaking and through his role as a safety manager within the company where he works. He’s been instrumental in writing our venue risk assessments and devising safe methodologies for SUP Club and our SUP lessons. But Trev’s a whole lot more than ‘Mr Health & Safety’! Having paddled with us for many years now, ‘Coach Nacho’ is a key personality on the South Essex SUP scene – he brings an infectious enthusiasm and passion for all things SUP that invigorates everyone from those that he teaches on our Learn to SUP courses to experienced paddlers at SUP Club…

Ian is SUPsect’s most naturally talented paddler – having inspired everyone at SUP Club for many years with his flowing SUP style, we’re proud to have him on our teaching team. With a background of skateboarding in his youth, Ian first discovered paddleboarding on a family lesson with his brother and their respective kids – taught by El & Dunc at Papermill. A natural on a board, he took to the sport incredibly quickly. Having since impressed on the racecourse and outridden much more experienced surfers in the waves, Ian’s our freestyle supremo who’s renowned for his turns and tricks. Going back to basics is no problem on Learn to SUP courses, but ‘Ë’ is always keen to share more advanced tricks with those who want to make a splash during SUP lessons too!

Most importantly of all, SUPsect is primarily about a like-minded bunch of paddlers getting together on Wednesday evenings (and more) at our free SUP Club – and it’s the people that come to SUP Club that make our paddles fun. We try and reflect that in our social media on Facebook @SUPsect, Instagram @SUPsectUK and Twitter @SUPsectUK 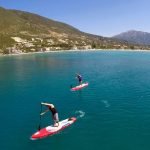 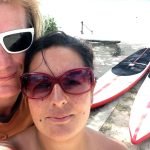 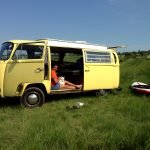 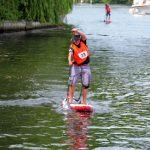 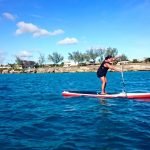 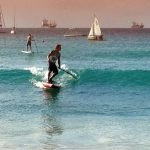 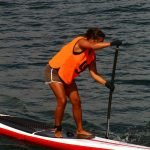 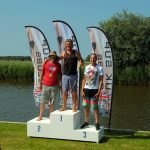 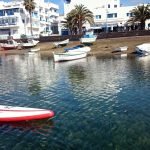 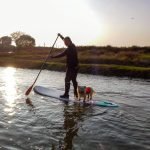 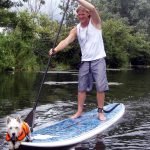 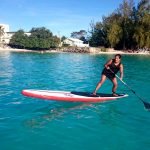 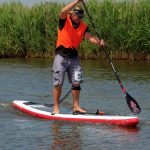