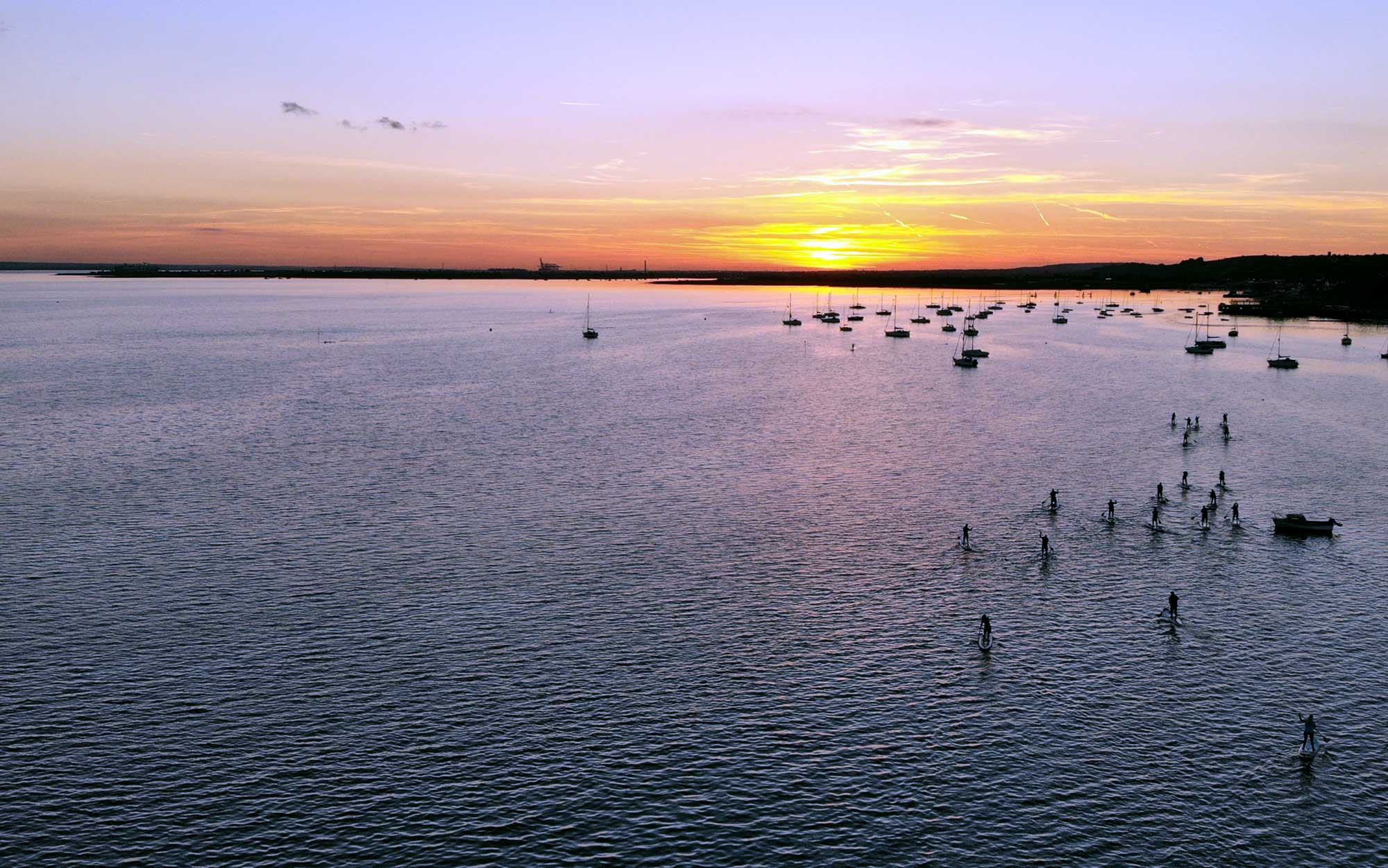 It’s been a few weeks since our last regular blog, and autumn’s begun to take hold in the meantime – yet now as SUP school beginner teaching season is done, our SUP year is very far from over as we’re continuing to pack a lot into the ever-shorter days. We’ve had another couple of classic SUP Clubs, El and Dunc took a surf trip to West Wales before hitting the British SUP Club Champs in Windsor on their way home, a small group hit Putney to take part in the Big Ben Challenge, plus Dunc’s now started 1-2-1 race coaching for winter ahead of the newly formed EASI and long-established Bray Lake ‘frostbite’ series of monthly winter races…

First up, back on the 19th September, we got our first taste of autumnal darkness as SUP Club went from Mill House to the A12 roadbridge and back, ending after dusk: it was a super-windy day but we still had enough protection from the trees for a great night and a surprisingly high turn-out of 21, giving a few the chance to debut their winter lights – plus we were joined by our ‘crack’ Red Paddle Dragon team for their first team paddle ahead of the SUP Club Champs. Then 16 of us hit the Six Bells for dinner. Magic.

The following week was a rare SUP Club hiatus as we took a Wednesday off – partly to rest our team ahead of the SUP Club Champs, and also because El and Dunc had taken the opportunity to dash off to West Wales (with Clare and Colin, plus of course Bongo dog and Basie!) for a week’s SUPsurfing and flat-water paddling on holiday in Pembrokeshire. Despite a dodgy forecast and a fair bit of wind and rain at first, Dyfed delivered the goods as ever – a few days of surf including two fun-size waist-high sessions at Broadhaven and a heavier, occasionally head-high, day at Newgale. Plus some flat-water cruising perfection at Solva up north and Dale down south of St Brides Bay. Having visited every year for 17 years now, it’s probably about time we got a SUPsect group trip organised – maybe next season…

On the way back, suitably refreshed, El and Dunc joined the rest of our 20-strong Team SUPsect at Bray Lake to race at the 2018 British SUP Club Championships – where, as said in Dunc’s blog, we were completely stoked to finish fifth out of 17 of the UK’s strongest SUP clubs. We claimed 11 podiums – four first places, a second and six thirds, plus plenty more ‘super-close’  in 4th place. Our 10 Race Club training nights on Fridays through the summer really did pay off! We’re still buzzing from the weekend now, over a week on.

The weekend previously, a 5-strong group (Dan, Andy T, Dave, Kate and Chippy) had headed to Putney Embankment to take part in the Big Ben Challenge – billed as a 20km mass-participation paddle up the Thames to the Houses of Parliament and back as run by Active 360. This year the London Crossing race element (15k one-way from Putney to Tower Bridge, early in the morning to avoid the worst of the river traffic) was won by wunderkind Ben Pye. Unfortunately the week’s rainstorms meant that the Big Ben Challenge later in the day had to be abandoned due to poor water quality from the storm drains, so instead entrants paddled west to Kew Bridge and back: a good time was had by all, although reports of the water quality really weren’t so great – bring on the super-sewer, aptly being built by event sponsors Tideway!

Back here where the Thames’ estuary water’s infinitely better quality, last week tides and conditions finally came together for a SUP Club classic – the ‘Paddle to the Pub‘ from Chalkwell to the Crooked Billet in Old Leigh. Thirty-four of us hit Chalkwell to be greeted by a glorious sunset to paddle in to; we made the gentle 2.5km paddle into Old Leigh as dusk descended, then enjoyed a drink outside the Crooked Billet as darkness fell. Then it was a really atmospheric paddle back on the glassy water in the dark, lit by green and red lights for safety. Afterwards, 15 of us headed back to the Billet for dinner and to enjoy their open mic night. Another classic night: see the Facebook gallery for more – and check out this awesome drone edit from Sam Gawthorp (@samgawthorp on Instagram).

Then last weekend we shifted back into race mode, as the autumnal conditions were ideal for race training – plus off the back of his successful competition season, Dunc is in demand for some 1-2-1 race coaching. If you want to add some serious power to your stroke, polish your skills, learn race strategies and work on your fitness and technique over winter, Dunc is offering 2-hour 1-2-1 coaching sessions for £80 at dates and locations to suit. Get in touch via [email protected]

And if you want to keep the racing momentum up over winter, there are a couple of ‘frostbite’ race series that will keep you on the startlines. We’ve collaborated with the other big East Anglian SUP clubs to form EASI: the East Anglian SUP Initiative and will be running our own regional winter race series, open to everyone from novices to experienced racers with classes to suit various board types. We’ll be hosting the final event in February (the first is Barefoot SUP at Hunstanton on Saturday 27th October: register here) and your best three results of the five monthly races will count towards an overall ranking – much more on the EASI Facebook page. Meanwhile back in Berkshire, we can also thoroughly recommend the Bray Lake Frostbite series: more on the Bray Lake SUP Facebook page.

So what of this week? Well, Wednesday night it’s SUP Club again – of course! Unfortunately the tides and south-easterly wind forecast mean that a coastal session won’t be possible, so with no moon and an early sunset (c. 6.20pm) we’re looking at a crazy early one at the river so it’s not too dark to see by the end. Possibly launching about 5.45pm from Paper Mill Lock for a quick trip to All Saints, Ulting, and back. Stay tuned to @SUPsect on Facebook and SUP Club #28 right here for the heads-up tomorrow and full call by Wednesday lunchtime. We are planning to continue Wednesday evening SUP Club right through to Halloween on 31st October – then we’ll be moving to suitable Saturdays and Sundays through winter, as and when weather and conditions are right…

Lighting up time at SUP Club on the River Chelmer! 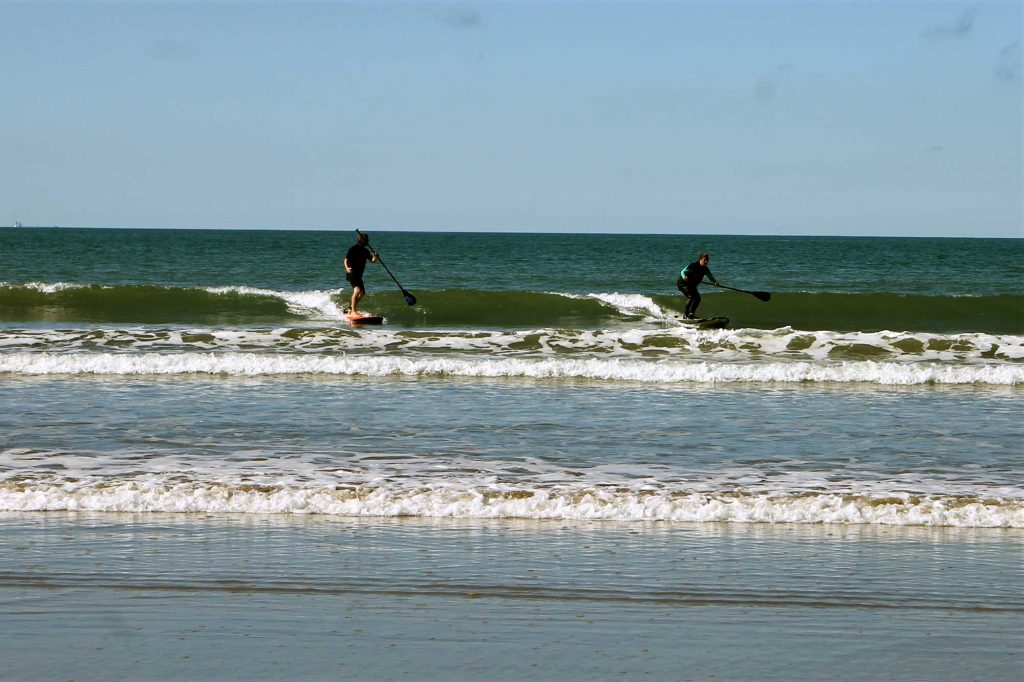 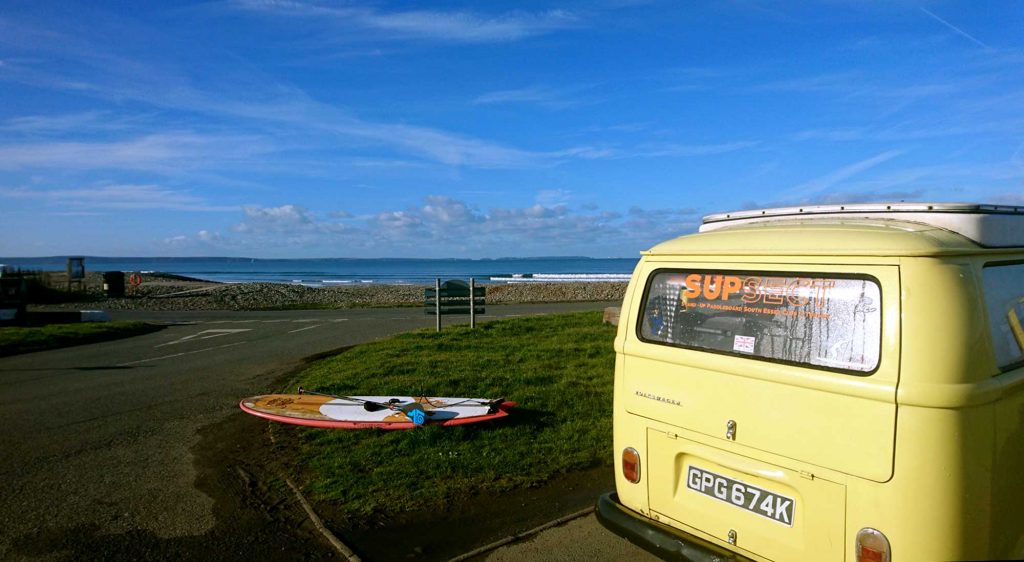 Ready to get in at Newgale, Dyfed, West Wales 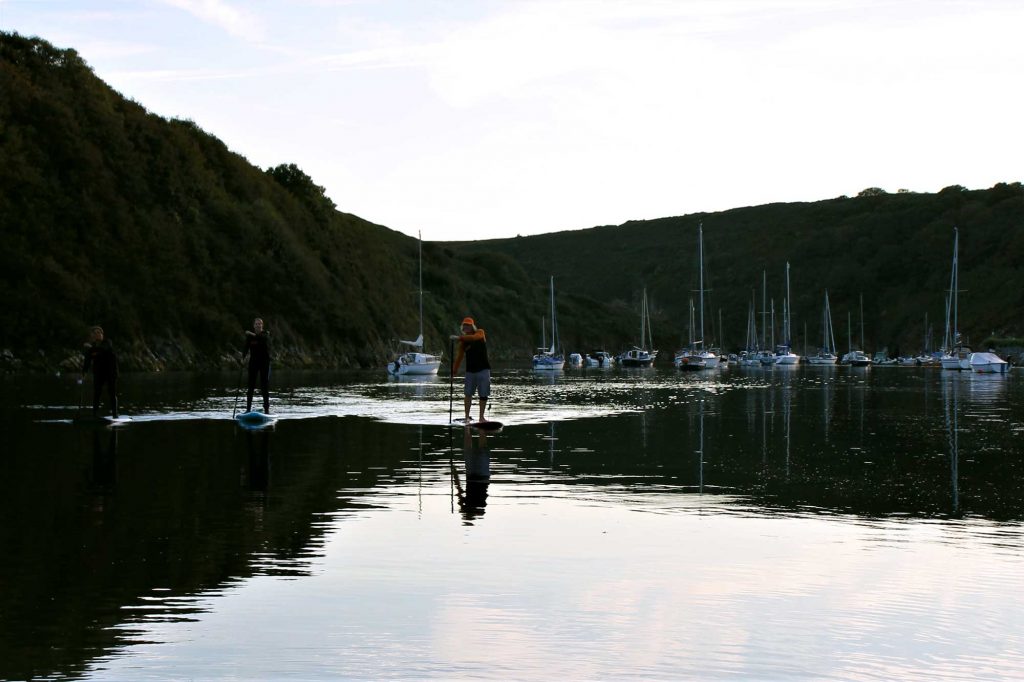 El & Dunc out back at Newgale, Pembrokeshire. Photo: Colin Green 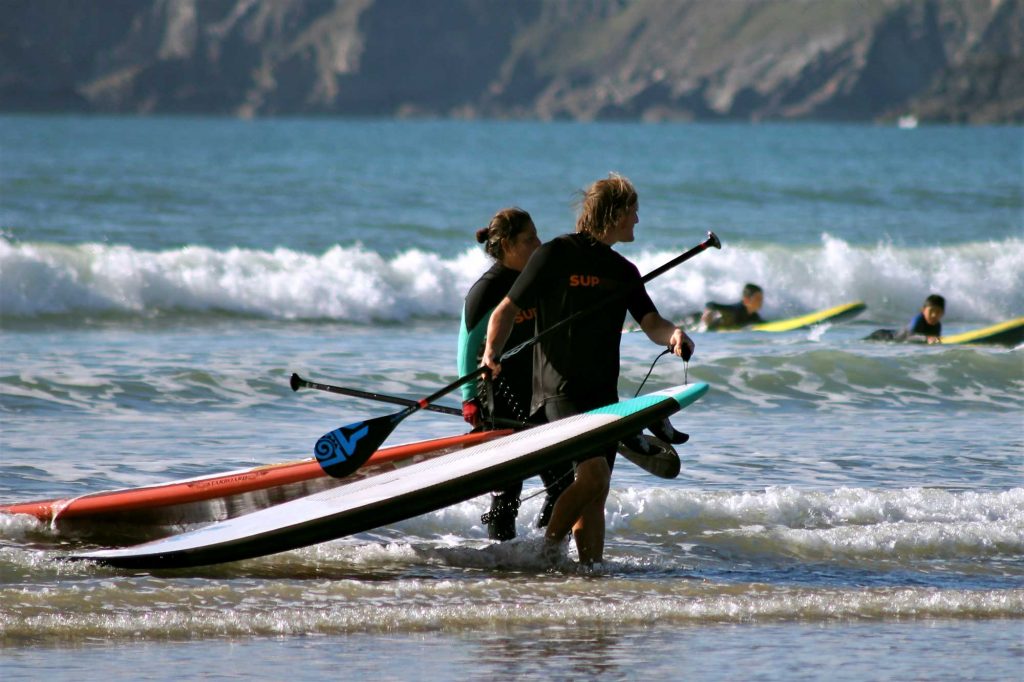 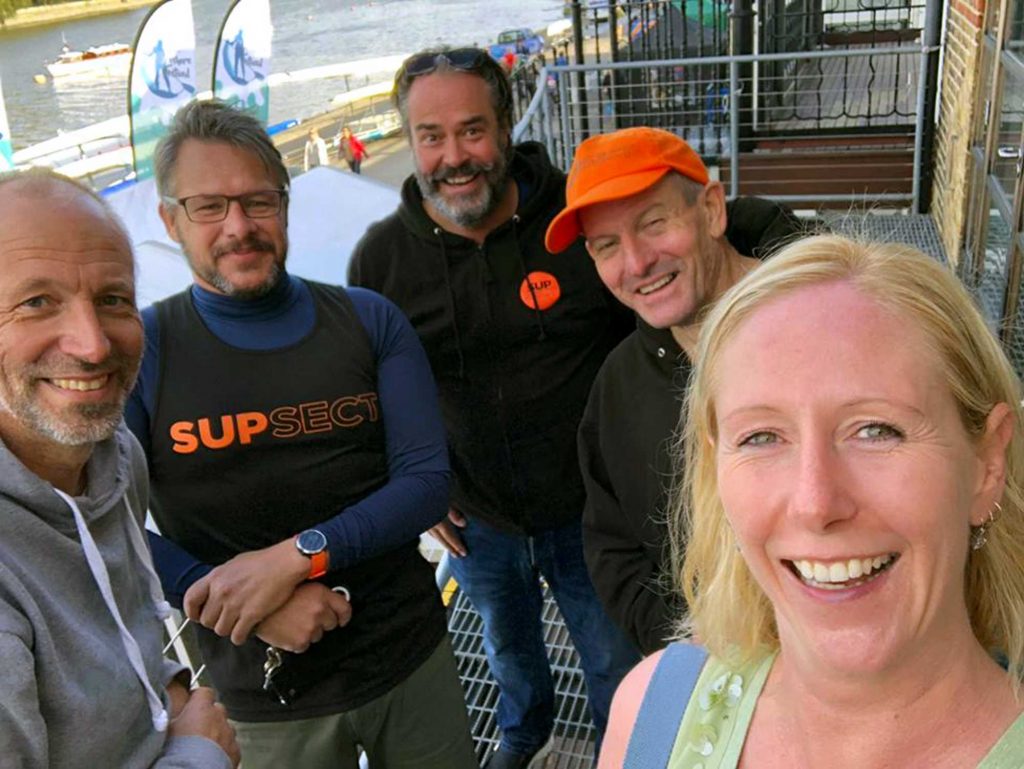 The gang at the Big Ben Challenge that never was 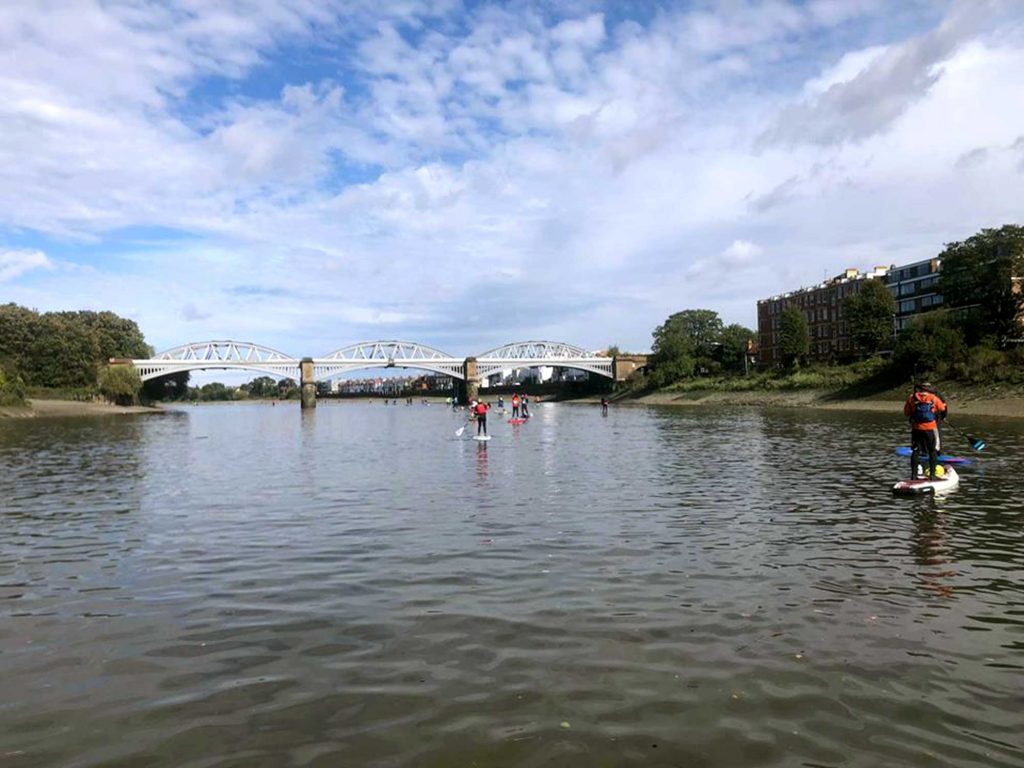 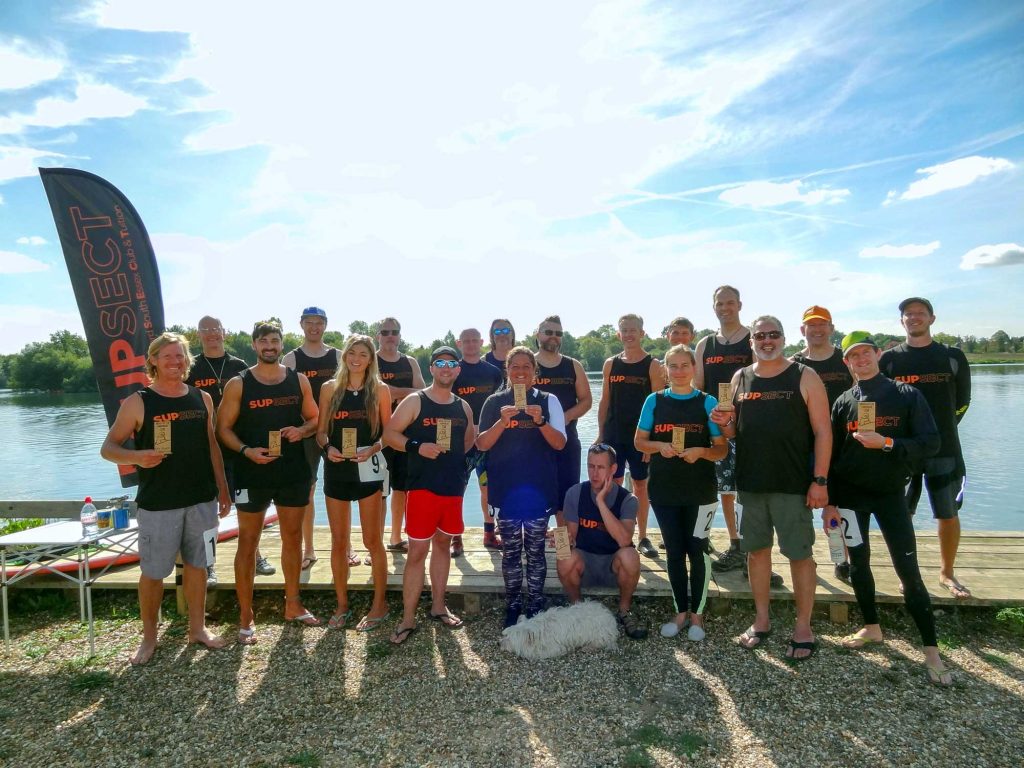 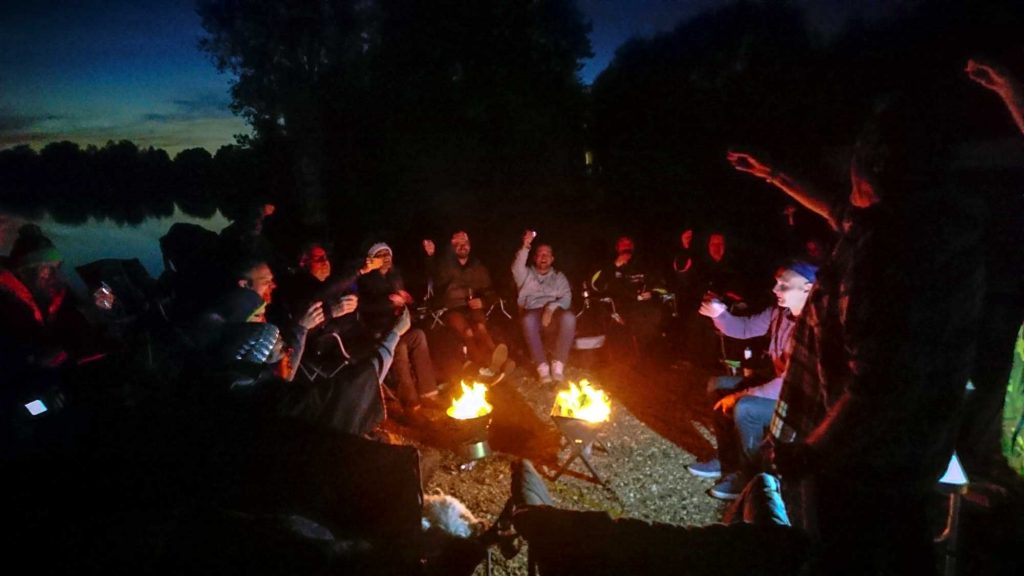 Toasting our success at the British SUP Club Championships 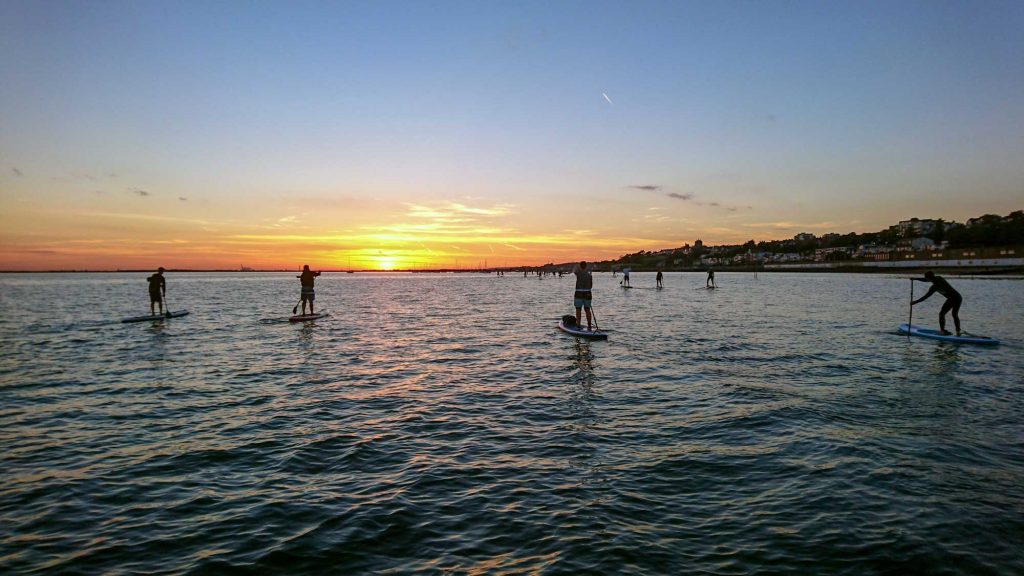 Heading into the sunset from Chalkwell 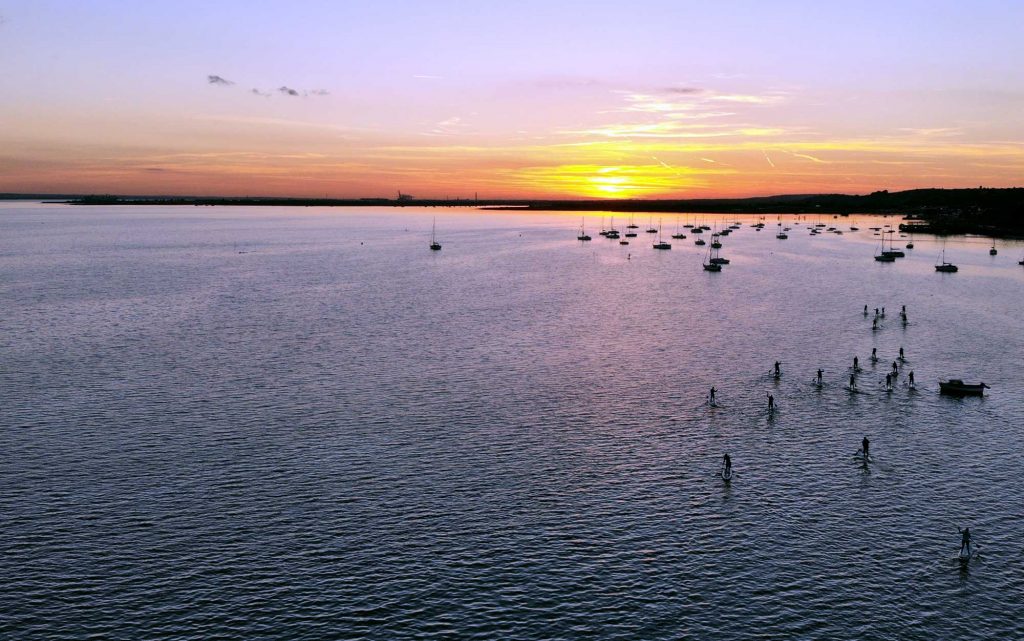 Drone pic of our SUP Club Paddle to the Pub. Photo: Sam Gawthorp 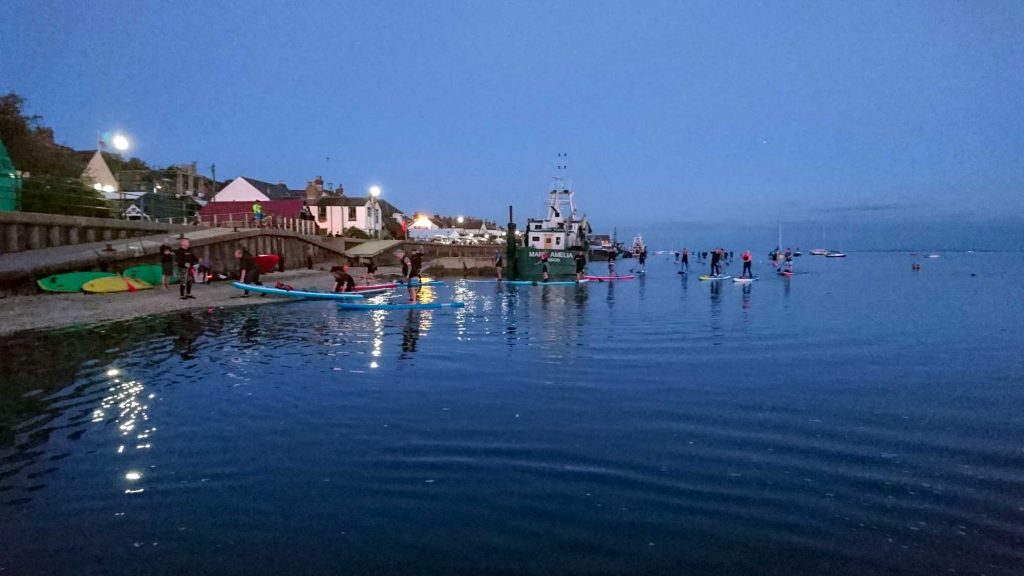 Getting out at Old Leigh outside the Crooked Billet pub 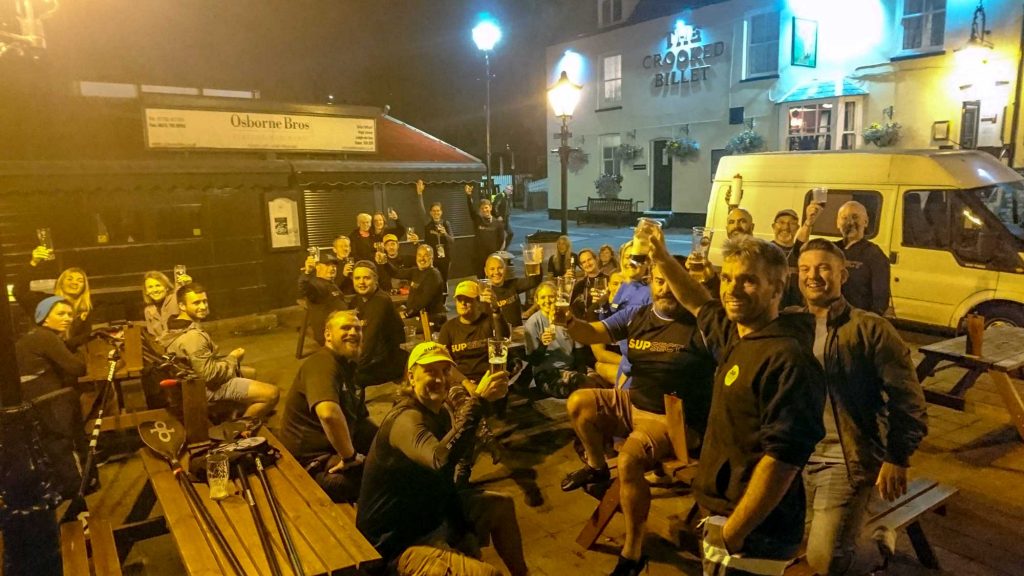 Outside the Crooked Billet pub, Old Leigh, during SUP Club 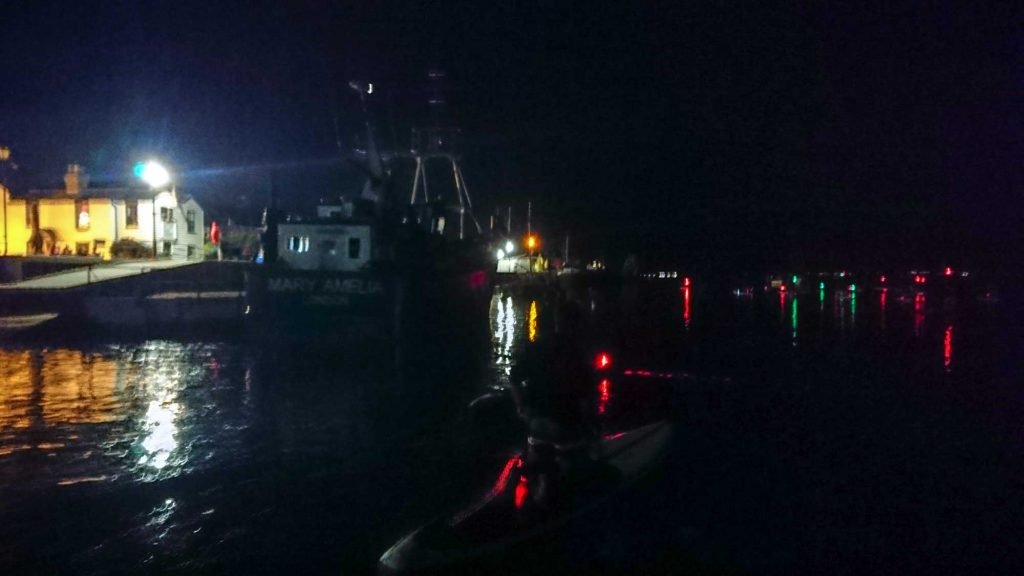 Lights on, heading home from the pub in Old Leigh during SUP Club 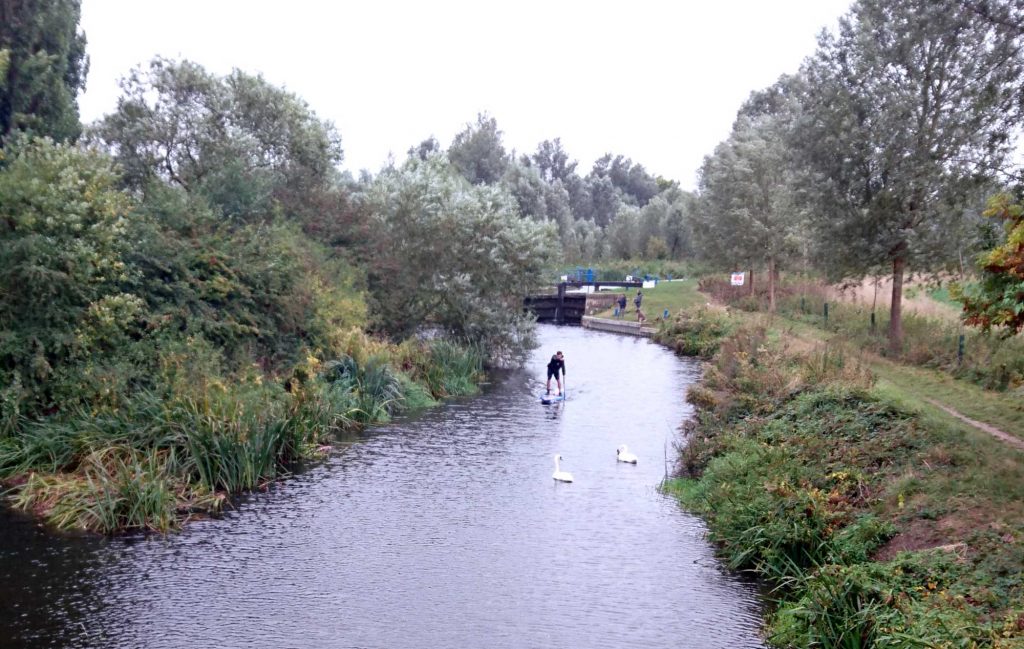