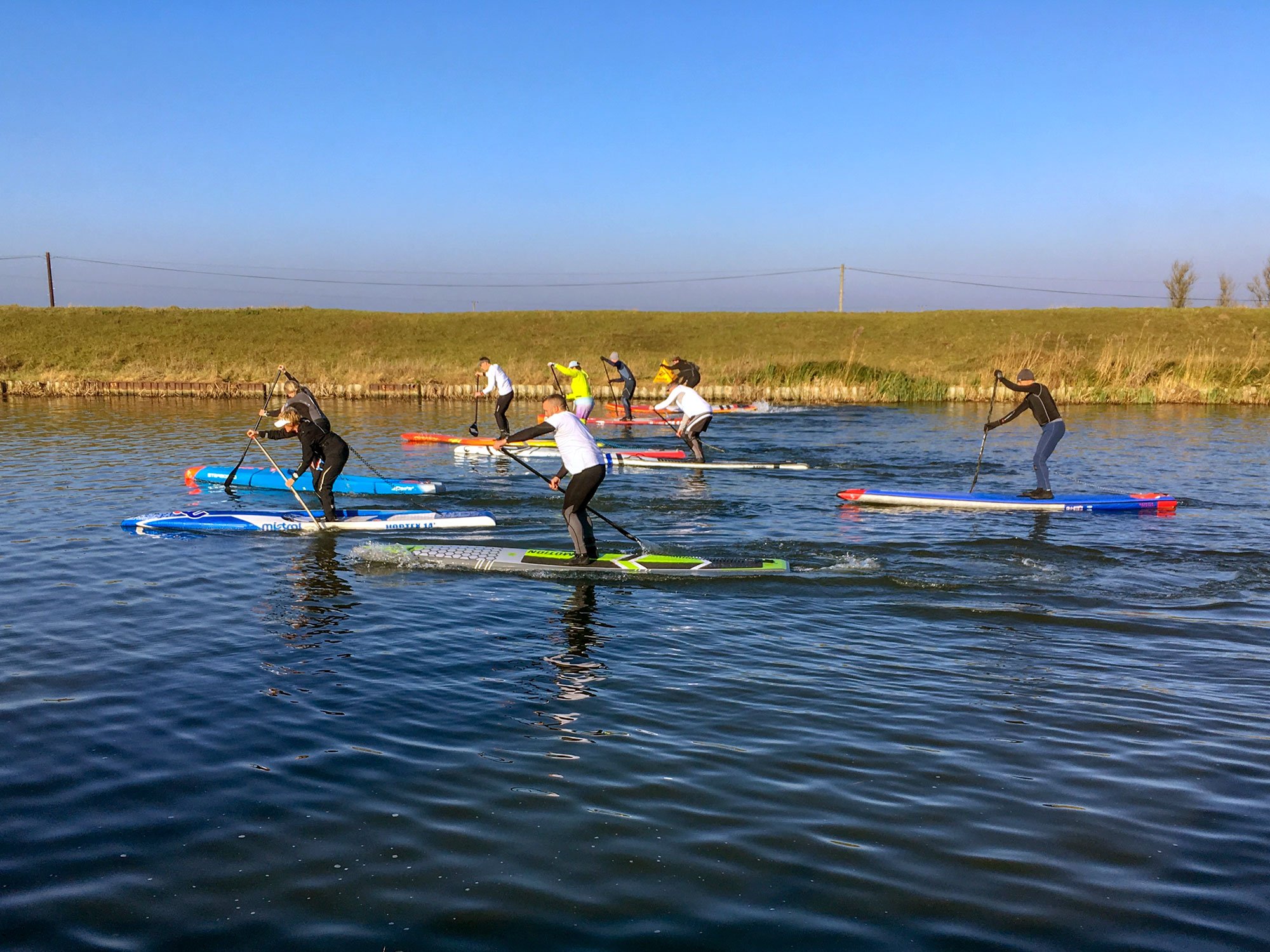 So winter’s finally getting a grip – yet there’s still plenty going on despite the sub-zero temperatures. Pick your spot, get your timings right, wrap up warm and conditions have actually been pretty good for paddleboarding! Last Sunday saw the latest race in our EASI winter series up on the River Ouse, while others got out for social paddles more locally, and there’s plenty more to come…

The fourth round of our EASI (East Anglian SUP Initiative) winter race series was hosted by Barefoot who, given the time of year, sagely elected to look inland for their location. And what a spot it was – The Ship pub in Brandon Creek just north of Ely on the Norfolk border is right on the waterfront of the River Ouse and offered a very warm welcome on a cold January morning. This round had again attracted a healthy 26 entries (including a 6-strong SUPsect team) so the start sequence for the 5km race was to be three waves at 3-minute intervals: first the challenge fleet, then the 14’s, then 12’6″s (including the 28+ iSUPs and an all-rounder). Midday was the first start as the three challengers, Becky, Fiona and Carolyn went off with Kelvin (Suffolk), who was resting a niggling rib for this race. Three minutes later the 14-foot fleet charged off: Sam (Barefoot) and Martin (Norfolk Outdoor) went off fastest, Martin narrowly taking the lead as Dan (Frangipani, yet occasional SUPsect!) tucked into 3rd place approaching the freshly broken ice at the first corner. Phil (Yellowbelly) slid into 4th on the water ahead of Anni (Frangipani), Neil (Suffolk), Max (Barefoot) and Wilma (Suffolk). Our Graham (SUPsect) hung way back on the startline to tentatively get used to his new board, that he’d literally just set foot on for the first time! Fair play though, he soon got to grips with his Starboard Airline and paddled his way up to 4th place with a respectable time under 40 minutes. Meanwhile Martin stormed on to win the race in 34:16.7, followed by Dan in 2nd just over half a minute back, then Sam finished 3rd on the water to claim first woman in 36:06.1 – Phil took 3rd men’s 14′, with Anni and Wilma 2nd and 3rd women’s 14′ respectively. Again, the 12’6″s proved to be the busier startline as Dunc (SUPsect) found clear water in the middle, but had to graft hard to gradually pull his Red Paddle Elite away from the pack. In the end Dunc finished a minute and a half clear to win the 12’6″ class in the third fastest overall time of 36:05.8, followed by Andy (Barefoot) in 2nd and Andy (SUPsect) a strong 3rd, just seconds ahead of Mike (Frangipani) in 4th. Steve (Barefoot) won the 12’6″ x 28″+ iSUPs in 37:50.1, closely followed by our Al (SUPsect) in 2nd and Nick (SUPsect) 3rd, several minutes clear of Brett and Andy in 4th and 5th. In the women’s iSUP, Anna (SUPer Whale) won out in 45:43.3, followed by Shelley in 2nd, Kate (SUPsect) 3rd and Hayley 4th. Kudos too to the only all-rounder, Rea, who finished in 54:10.6… Find loads of pictures on Facebook and full results here.

Next on the winter race scene, Bray‘s Frostbite series continues with race 4 on Sunday 10th February – more @BrayLakeSUP on Facebook. Then on Saturday 23rd February it’s our turn to host the final round of the EASI winter series! Weather allowing, we’re planning to race 7.5km from Hullbridge to Battlesbridge and back, on the top of the tide, which will mean a mid-afternoon race: timings and details TBC, but we’re looking at a c.3pm start – more on the EASI Facebook page.
• EASI 5 – Saturday 23rd February, Hullbridge, hosted by SUPsect

Of course, even at this time of year it’s definitely not all about racing… After new year, El and Dunc took the opportunity to escape to Barbados for a couple of weeks of warm-water paddling, which was suitably idyllic with turtle spotting, cruising, and fun-size surf. While back at home several paddlers on the SUPsect Forum have been scoring it too, with sessions from Hullbridge, Chalkwell, Two Tree and up near Kev’s new house at Creeksea. If you’re still getting out as we go into the coldest time of year, be sensible, dress appropriately, and bear in mind that in sub-zero temperatures freshwater locations can and will freeze – hence we’d expect the River Chelmer might be off limits for a little while…

…which is why tomorrow’s proposed river clean with Essex Waterways has been postponed. Half a dozen of us were ready to help litter-pick with other local canoeists and paddleboarders, which unfortunately won’t be possible in frozen waters. We’re looking forward to a new date being announced soon on the IWA Essex Facebook page.