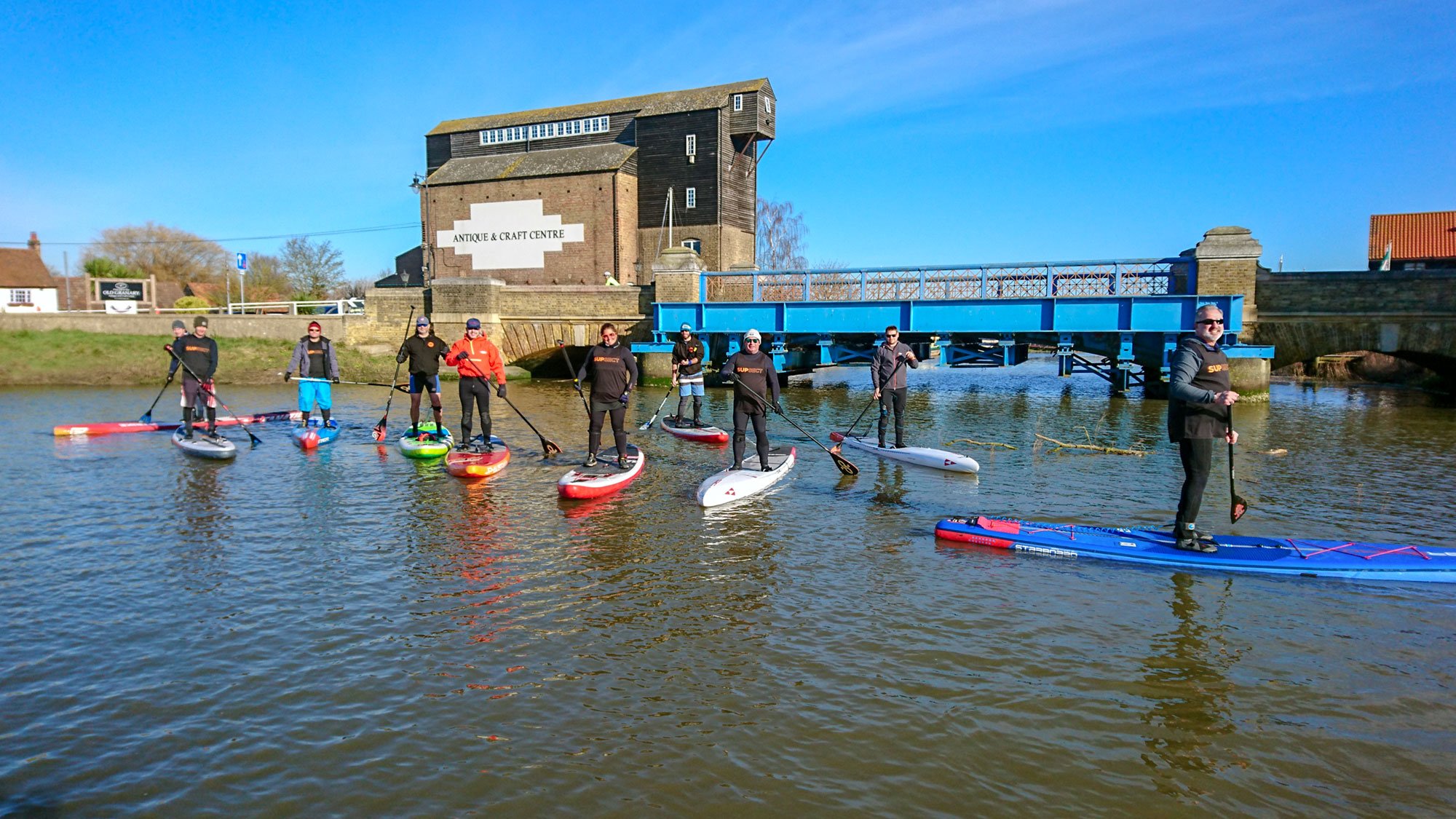 It’s been a pretty incredible February, weather-wise – and apparently it’s set to get even warmer again at the end of this week! Which certainly bodes well for our final race of the EASI winter series on Saturday. Plus socially, we’ve been getting out much more comfortably and frequently than we’d usually dare hope at this time of year…

Last weekend a small group of us met up for a Saturday SUPplement with a 10km blast over to the Canewdon Buoy from South Fambridge. It might have been cloudy, but with temperatures still well into double figures it felt pretty warm, and we tucked out of the light southerly wind very nicely on the Crouch at low tide. A fortnight previously, over a dozen of us enjoyed a sunny Sunday Service with a cruise up to Battlesbridge from Hullbridge then a couple of pints and a catch-up at the Smugglers Den. More @SUPsectUK on Facebook.

That Hullbridge to Battlesbridge route is exactly the course for this coming Saturday’s big race – the 5th and final round of our EASI (East Anglian SUP Initiative) winter race series, when it’s our turn to host! We’ll be finalising details through this week and updating the event page with confirmed timings, but we’re looking at a 7.5km course with a c. 3pm race start, so registration will be from 2pm with a race briefing about 2.40pm (SS5 6ND / www.supsect.com/hullbridge). Entries are now open via Webscorer – keep an eye on the event page @EASI on Facebook for more. With categories to suit everyone with solid winter paddling experience – and non-paddling supporters very welcome indeed – maybe we’ll see you there? After, we’re planning on drinks and prizegiving at the Smugglers then probably dinner at Simla Tandoori if anyone’s hungry…

Talking of racing, four of us headed west to Bray Lake the weekend before last for the fourth round of their Frostbite series on Sunday 10th February. That was in much more standard February weather though – breezy and chilly, although thankfully not too bad as the rain held off apart from a pretty welcome shower mid-way through the race. After a notoriously hardcore technical course for round three, race director Andy C was very careful to design this route around the weather with some upwind / downwind, but very little crosswind and plenty of shelter. Four laps were called, approaching 8km altogether – all of the women were released first, followed by all of the men, which made for a pretty busy startline. Young Tom (14′ Bray) went off fastest, closely followed by Kelvin (14′ Suffolk) – and these two continued to spar for most of the race, until Tom pulled out enough of a lead into the final lap to finish nine seconds ahead in 57:05. Andrea (Bray) proved totally untouchable in the women’s 14′ to finish in the 3rd fastest overall time of 58:42. Dunc (SUPsect) was 4th fastest to take 1st 12’6″ and 1st inflatable on his Red Paddle Elite in 1:00:14 – next came Dave (14′ Bray), Dom (12’6″ iSUP Bray) and Hugh (12’6″ Bray), closely followed by Al (SUPsect) for 3rd 12’6″ iSUP in 1:05:00, then Andy (SUPsect) took 3rd 12’6″ hardboard in 1:07:15. Nick (SUPsect) didn’t have such a good day – he bravely got around the course, but was still suffering from an illness that had stuck him down the previous night. Find full results here. The final round at Bray will be Sunday 10th March – more @BrayLakeSUP on Facebook.

Meanwhile we’re beginning to make plans for spring too – our first trip of the year is already booked to South Devon, where 20-odd of us are camping over the weekend before Easter to coincide with the Head of the Dart as several will be racing the first round of the GB SUP national series. We’re planning another camping getaway over the late May bank holiday weekend – stay tuned for more details on that as we have them. And the nights are finally beginning to get longer now, so Wednesday night SUP Club really isn’t too far off now – we’ll definitely be back on from Wednesday 3rd April after the clocks have gone forward … maybe even earlier if we see a suitable opportunity? More @SUPsectUK on Facebook. Until then, keep an eye out for Sunday Services and Saturday SUPplements when conditions are right – and if you are getting out by yourself, don’t be fooled by the weather; remember to play it safe as that water’s at its coldest right now. Check the forecasts, choose the venue for the right conditions and always dress appropriately. See you out there!