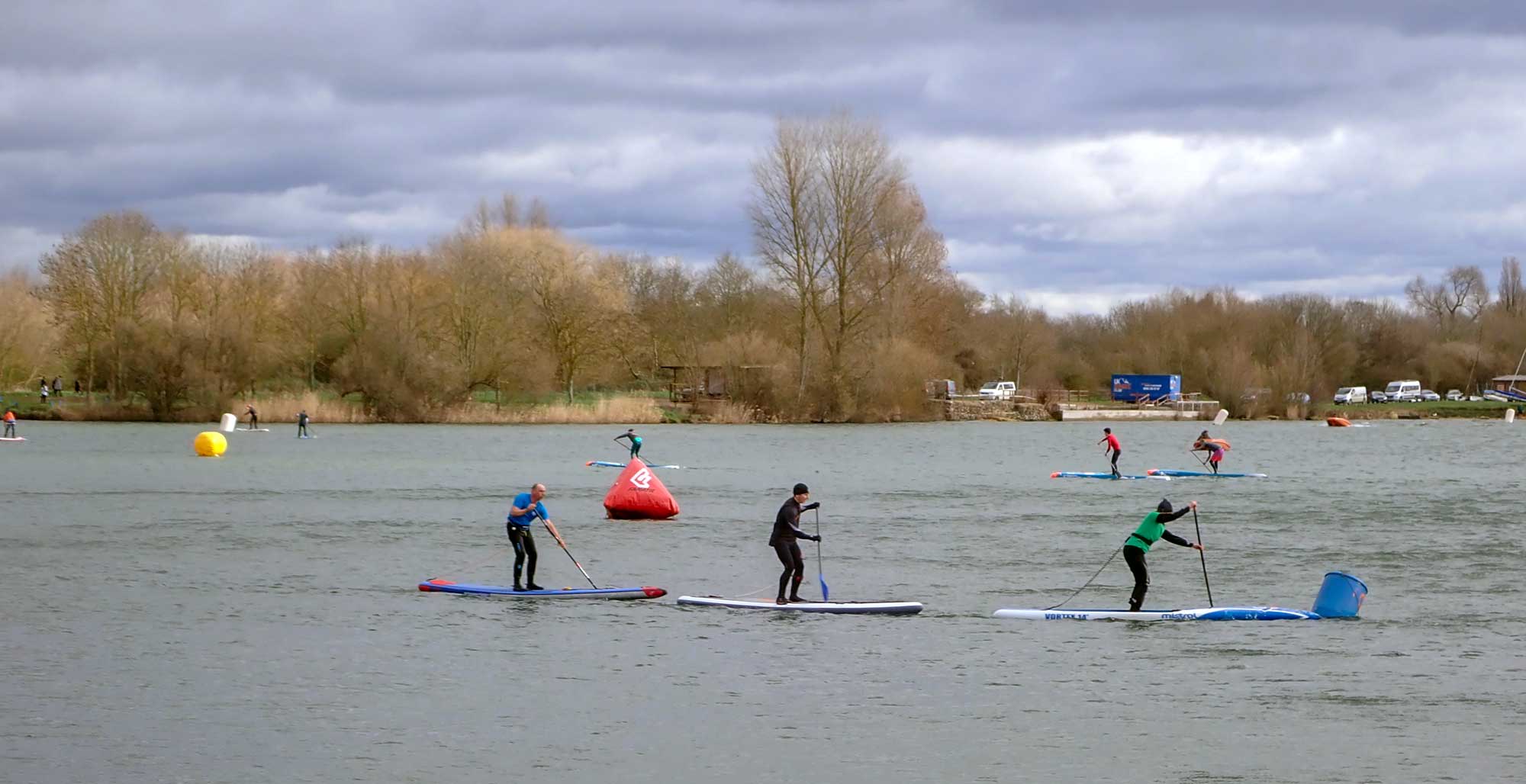 There was no way that ‘false spring’ was ever going to last, so it’s no surprise that winter’s come back to remind us how lucky we struck it in February! Yet even Sunday’s gales didn’t phase Bray Lake, who ably and safely ran the last race of their Frostbite winter series. Storms aside, the first signs of spring are definitely showing though – we’ll be back to SUP Club in three weeks’ time, and are already taking bookings for the first few Learn to SUP days of our 2019 teaching season…

A few of us tried our best not to be phased by last weekend’s weather forecasts and headed back to Bray Lake on Sunday for the fifth and final round of their Frostbite winter race series. Has to be said we were greeted by an angry looking lake as the day’s high winds had already taken hold by 9am and were whipping up some pretty fearsome chop outside the clubhouse. Fortunately the sun had come out, otherwise it’s unlikely many would have been prepared to brave those conditions. Quite rightly, several entrants decided against anyway – including our Andy, who’s still recovering from bruised ribs after taking a fall during our EASI race a couple of weeks ago so wisely didn’t want to risk aggravating them. That still left a healthy fleet of 23 prepared to take it on, including SUPsect‘s Dunc, Al and Nick. Frosty and Andy at Bray has designed a safe course to suit the conditions and give everyone a fighting chance – three laps of a short M-shaped course up in the sheltered north-western end of the lake followed by a downwind blast through the worst of the chop to finish in front of the Braywatch tower. They’d also laid on three safety boats plus plenty of assistance from @BrayLakeSUP members in, on and around the water: there really aren’t many places that would have been able to run enjoyable racing, in total safety, in that weather! Although it was windy, incredibly windy in places, the race itself went well – albeit a few were forced to retire. Dave (Bray) called it a day after he hit his nose on his board during a fall, while fellow Bray 14’s George and Kevin also recorded DNFs. Kevin’s wife Lesley (Bray) did finish though, second in the women’s 14’s behind Anni (Frangipani) in first with a time of 27:22. Oxford‘s Martina got around in 35:28 to take the women’s 14′ iSUPs while her partner Jonny took the men’s 14’ iSUP in 26:22. Susan (Bray) took the women’s 12’6″ honours in 28:10 while Felicity (Oxford) won the women’s 12’6″ iSUP. The 12’6″ and 14′ fleets had started a minute or two apart, plus crosswinds on sections of the 3-lap course had strung the fleet out pretty well, so it was a case of positional racing around the cans before simply surviving the super-choppy downwind section. Has to be said, most people went swimming at some point! At the front of the fleet, Dunc (SUPsect) retained his lead throughout the race and stayed upright downwind to cross the line first in 22:10 – which he’s stoked to discover was the fastest time of the day, seconds ahead of 1st 14′ Dom (Bray) in 22:13 and 2nd 14′ Tom (Bray) in 22:45. A super-impressive third across the line, and fourth fastest overall, was Al (SUPsect) for 2nd 12’6″ iSUP in 23:09. Behind him came 3rd 14′ Marcus (Bray), 12’6″ solid winner Hugh (Bray) in 23:39, 14’s Simon (Bray), Andrew (Oxford), 12’6″ iSUPs Dave (Bray), Nick (SUPsect), and more… Find full results on Webscorer.

If you want to try some racing this summer, we can thoroughly recommend Bray Lake‘s summer series – which is due to be the second weekend of every month from May to September inclusive. This season they’re planning to develop a new league ranking system, which should allow for much more competitive racing than the previous board classification system has produced. To which end we (and other SUP clubs) have been asked to run ranking qualification time trials – stay tuned for more on this soon! And keep an eye on @BrayLakeSUP on Facebook for more on their summer series.

Talking of summer, the clocks are springing forward in just a few weeks (be ready to lose an hour’s sleep on the night of 30/31 March) which means the return of mid-week SUP Club. We’ll be back on Wednesday evenings from 3rd April – more on our SUP Club page, @SUPsect on Facebook and @SUPsectUK on Instagram…

Plus we’ve scheduled our first few Learn to SUP lesson dates at Paper Mill Lock on the Chelmer for 2019 – and pretty amazed that the first of our sessions on Good Friday is fully booked already! We now have a slick new booking system (you should see a ‘book now’ button bottom right of this screen?) so if you want to recommend us to friends and family, please point them towards www.supsect.com to book. We teach everything they’ll need to know for £50 including all kit and instruction on our 2-hour+ course – plus we offer a unique money-back stand-up guarantee! Our first few BSUPA Ready to Ride dates are as follows (or you can request a date to suit although more scheduled dates to come soon…)