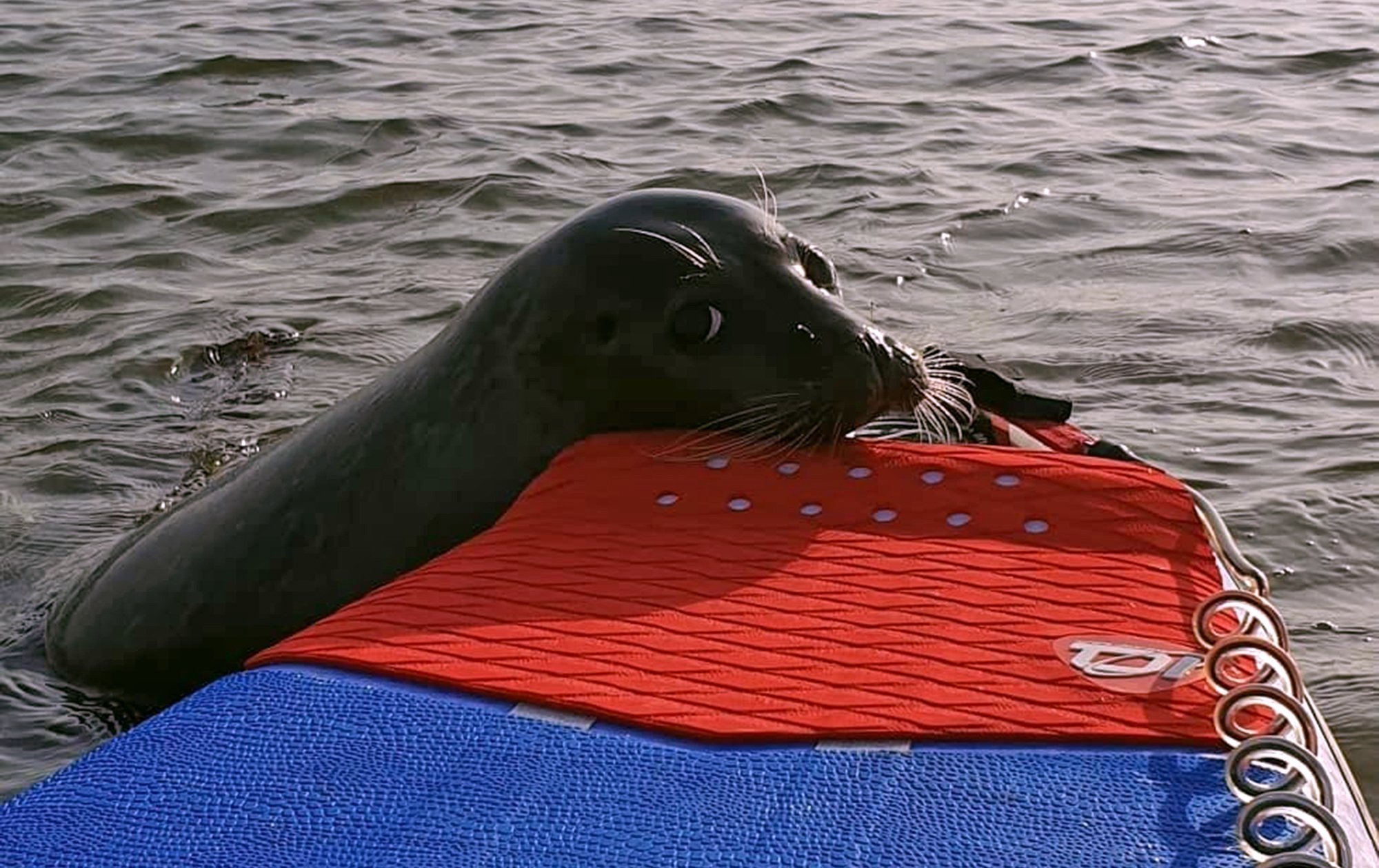 We’ve had a busy few weeks kicking off our summer season – SUP Club is in full swing and SUP School is well and truly open with our first lessons fully booked last Friday. The weekend previous we took a 20-strong group on a SUPfari to Devon alongside the Head of the Dart race, and we’ve also scored some great local paddles too – not forgetting the amazing arrival of our new friend, ‘Dave’ the seal…

We’ve had three super-social SUP Club meets on Wednesday evenings since the start of this month. First, 13 of us headed down the Ray from Two Tree Island in chilly but windless conditions for an 8k paddle on glassy waters – more here. The following week, tides and weather sent 18 of us up to the river at Papermill Lock for 6-8k – more of that here. Then last week 16 of us headed back to Two Tree for a workout into the wind and tide before flying home: tough work, but we were visited by a new friend – Dave the seal – who’s much more curious than most and came to properly check us all out. Not just from the water, but also trying to climb onto several boards! More here. SUP Club is completely free if you have your own kit and know how to use it (and if you need to learn, it just take one lesson with us!) stay tuned for updates on our SUP Club page, and on our social media @SUPsect on Facebook and @SUPsectUK on Instagram…

Talking of lessons, our teaching season’s off to a good start already – we had two full courses on Good Friday at Paper Mill Lock, in amazing weather. We got a dozen new paddlers stood up dry and through all of the essential technique, then a few cooled off with some splash-around step-back turning. We still have spaces on our Learn to SUP course this coming Sunday 28th April afternoon – and more in May and June too. But our first group teaching session of the season was a couple of weeks ago, as four friends who’d already bought their own kit were looking to brush up on their technique ahead of the Head of the Dart race down in Devon. And they did great, moving from the basics up to more advanced race techniques within the space of a couple of hours down at Two Tree Island.

That tuition came good the following weekend at the Head of the Dart as it was a windy day alright… We combined the race (in which several of our paddlers had entered) with a 20-strong camping SUPfari, and had an awesome few days – despite that chilly, breezy weather the weekend before Easter! Many of us left super-early on Friday morning to arrive on our campsite (Silver Gates in Churchstow) by lunchtime, which allowed us a couple of hours’ playing in the surf from Bantham before a celebratory pint in The Sloop Inn. Meanwhile the later arrivals camped up and we hit the Church House Inn for a big group dinner. Saturday dawned a little windier, and many of the racers took a rest day as they registered for the event at Red Paddle HQ, but half a dozen of the camp decided to take on the downwinder from The Fisherman’s Rest in Aveton Gifford down the River Avon to Bantham – which turned out to be a super call! We regrouped late afternoon at The Crabshell Inn, by Waterborn HQ in Kingstown, before another big group feed at the Church House in the evening. Sunday, race day dawned even windier – and in fact the HotD organisers had already shortened the course to accommodate conditions. Again, the camp split – some taking on an upwind / downwinder from Bantham to Aveton Gifford and back this time, while the others headed to Totnes to race. Suffice to say it was very windy, but SUPsect racers conducted themselves brilliantly in what were super-challenging conditions. Dunc finished 1st 12’6″ overall in 01:24:41, followed 5 minutes later by Al for 3rd place (both on inflatable Red Paddle boards) Andy T was another 5 minutes back to claim 1st and 3rd place in his age category from HotD and GB SUP respectively! ‘Wellyboot’ Steve finished strong, very close behind in 01:34:57, while Ian powered his 14′ Red Paddle Elite home in 01:35:13, despite stopping to help Jo (who along with fellow leisure fleet paddler Shaun had been on our improver course just the week before) by providing some much appreciated Jelly Baby power! Towards the front of the 14′ age category, another SUPsect newbie Danny finished his first major race in an impressive time of 01:21:29. At the other end of the fleet, Barry finished strong on his SIC in a respectable time of 01:45:07, Dan put in a sterling paddle to finish the course in just over two hours, while Kate broke 2 hours to round off the women’s 14′ fleet. That evening, after a quick celebratory stop at The Albert Inn en route, we staged a SUPsect take-over of the Red Paddle party with a couple of hours of dancefloor domination, before returning to Camp SUPsect for a messy after-party into the early hours. The following day saw some go home and others slowly recover with a wander around Totnes. Then on Tuesday, the last to leave were El, Dunc and Bongo … after one last SUPsurf in pretty big conditions down at Bantham. What a weekend!

Of course, having camped through the cold weather, the Easter weekend just gone was an absolute scorcher! Again, we made the most of it – after our SUP lessons on Friday, a few of us got out on the multi-person Dragon board for a team paddle of 13k up and down the Chelmer from Papermill Lock, we had another little visit to Burnham on Sunday to scope out Althorne, then on Easter Monday we tried something a bit different with 10k up the west coast of Canvey Island and back to the Lobster Smack. Much more industrial than usual with the backdrop of Coryton, but we were able to tuck out of a pretty solid easterly breeze pretty effectively, and only encountered choppy conditions towards the end of the paddle (as is so often the way there!)

So what’s next? Well, tonight’s SUP Club will be up at Mill House on the River Chelmer – see more here. Then on Saturday several of us are back into race mode for the Battle of the Thames. And on Sunday we’re back into teaching mode for two more BSUPA Ready to Ride Learn to SUP lessons at Paper Mill Lock.

But back to our new friend, Dave the seal (who of course may well be Davina; who can tell?!?) SUPsect instructor Trev headed back out a couple of days after SUP Club with his cameraphone and a bit of time to hang out with our new pal. See the results @bigsupbaker on Insta. Importantly, we’re always careful not to chase the local seals – and always give them their space on the sandbanks – but they are naturally inquisitive, so get low on your board and they may come and check you out… As for the seal’s name – it’s definitely Dave Sanchez, according to Trev: “The seals made me their leader in return for teaching them to speak Mexican and giving them the recipe for fish tacos.” OK!!!