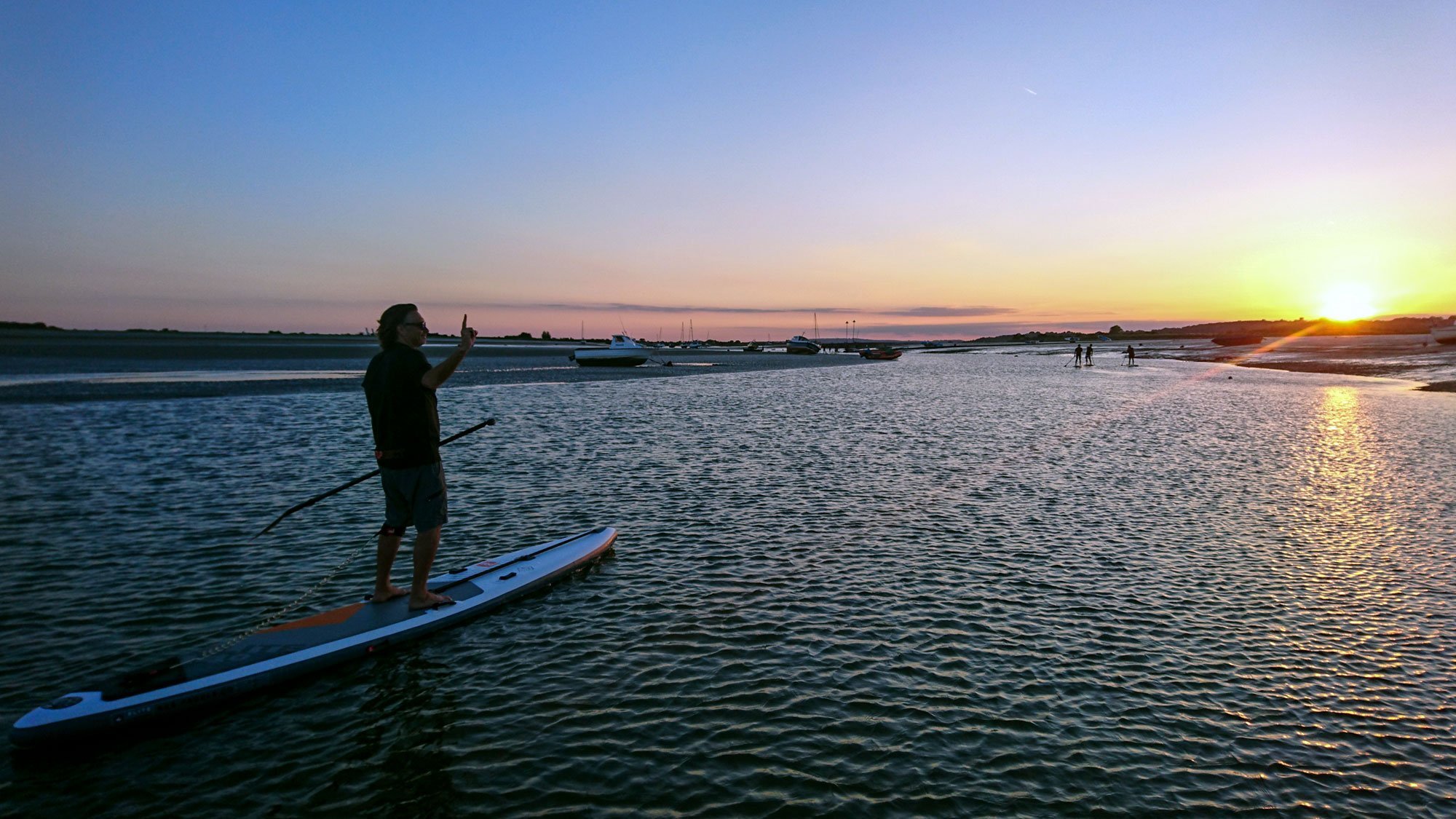 Storming SUP Clubs, fully-booked paddleboard lessons, fantastic free-paddling, racing glory, the start of Race Club – there’s been a lot of magic midsummer paddleboarding going on around the longest day, hence we’ve not found much time to blog about it. But here goes…

SUP Club has gone coastal the last few weeks, as the tides have started phasing nicely with Wednesday evenings. Four weeks ago it was still monsoon season but we had high tide at Chalkwell so went for a potentially pretty hardcore night – but 14 still showed for what turned out to be a very pleasant paddle around and then up towards the Casino before riding the chop home. Then after, as there weren’t too many of us, we were able to hit the Yak & Yeti for dinner! More here. The following week was a little breezy, but a late low tide and light westerly wind meant we were able to dash down the dogleg for a full-on splashabout session from Two Tree. 27 paddlers had a great evening of it – first some free-paddling, then a few fun rounds of SUPdog were followed by a massive no-holds-barred game of surf hockey until dusk, narrowly but deservedly won by the blue-and-white ‘Smurfs’! Definitely the wettest and funniest night of the year so far. Then, to the Elms for fodder and beers! More here. A fortnight ago it was breezy yet again, but north-easterly and coinciding with a perfect high tide at Chalkwell so we opted for another splashabout / chopfest evening of fun for a massive 37 of us. More here. We had more wind last week, but an 8.19pm low tide was too much to ignore so we chose to graft out down the Ray towards Seal Point from Two Tree into the easterly breeze before flying home. It wasn’t easy, but perfectly doable with the tide, so every one of over 40 paddlers put their heads down and battled out for between 3 and 5km before joyriding the wavelets back into the sunset. More here and some movies here too… Stay tuned to @supsect on Facebook for details of future SUP Clubs.

We’re having an incredible season of paddleboard lessons this year too, with SUP school running fully booked BSUPA Ready to Ride lessons up at Papermill Lock on the River Chelmer in Essex all summer long… We’ve had some brilliant groups, including the local netball team who came to learn to SUP and have some fun off the court! Plus we’re running the occasional Family Session and Improver Tour / Refresher Session too. July’s learn to paddleboard sessions are almost fully booked, but we currently have spaces throughout August – see our scheduled dates and book now via the button bottom right of this screen!

The early summer race season has drawn to a close with the second UK SUP endurance race and the 5th and final round of the GB SUP distance series. The Thames Ultra was the second round of Jo Hamilton-Vale’s awesome UK Paddle Endurance Series of long-distance races. This year, the start to the 45km race was at Windsor Marina near Bray (with the longer 75k option – popular with sit-down paddlers, plus Andre [Jersey] and Chris [Snowdonia] – now starting upstream near Henley at some ungodly hour!) Most of us SUPs set off closer to 9am for a few hours of downstream paddling to Twickenham. Young Tom (Bray Lake) set off super-fast to set the early pace, but Dunc (SUPsect) kept him in sight until he began to draw closer and eventually overhaul him after c.10-15k as the headwinds began to take their toll on the youngster. Meanwhile Danny (SUPsect) wasn’t hanging about in third place on the water, ahead of Kelvin (Suffolk) and Al (SUPsect). Kelvin suffered foot trouble and was forced to stop and grab a massage at one of the checkpoints. So eventually, the first three SUPs across the finishline were SUPsect – Dunc 1st (in 4:51:33), Danny 2nd and Al 3rd, both just a shade over 5 hours! Danny claimed first hardboard (behind Dunc on his Red Paddle 14′ Elite) – but that wasn’t it for SUPsect podiums, as Kate claimed first women’s iSUP, our team of Andy, Nick and Dan were first relay, plus Graeme finished second masters iSUP so every one of us came away with honours! To top it off, having finished first SUP across the line, after handicap Dunc was named overall event winner too… Just a week later, Sandbanks in Poole, Dorset, was the venue as BaySUP played host to the final round of the GB SUP distance series with an open-water finale. Dunc was super-proud to claim his first ever national title: GB SUP 12’6” Distance Champion with three race wins on his Red Paddle 12’6″ Elite this season. Andrew won the 12’6” Veteran’s Series after a solid season, while Al claimed 3rd 12’6” Overall and Danny took 3rd 14’ Senior. At the racing itself on Saturday, Kate did well to complete the 14’ distance course as the sea breeze filled in, then very few finished the 12’6” distance race in 10km of cruel cross-chop – but Al stayed upright on his 30” Red Paddle Race and put in a strong paddle to take 1st place, leaving Dunc a few seconds back in 2nd having not stayed so upright on his 25” Elite! In the technical, Dunc took 2nd on his 28” Red Paddle Elite (behind young Tom from Bray, freshly qualified for Team Wales at the ISA) with Al 3rd. Meanwhile news just in from the second round of GB SUP technical racing at Carbis Bay, St Ives, Cornwall, where Al made second place after taking the long trip west – good work!

And we’re now gearing ourselves up for the British SUP Club Championships in late September and are already overwhelmed by how popular our first couple of Race Clubs have proved! Open to all sorts of paddlers on all sorts of boards, this season we’re doing things a bit differently – with an hour’s technique workshop followed by a time trial element. Week one attracted 12 to the workshop and eight raced the 4.3k time trial from Paper Mill to Rushes Lock and back (more here), while last week’s second meet saw 21 at the workshop and an amazing 16 taking on a 3.7k time trial from Papermill to Little Baddow Mill Lock and back (more here). This Thursday the tides are right and the forecast’s looking good so we’re hoping to go coastal, maybe from Chalkwell, which could prove even more popular?!? Find this season’s provisional Thursday / Friday schedule and more on our Race Club page.

So coming up we’ve got SUP Club, possibly from Hullbridge or Two Tree this week as the tides are right even if the wind forecast won’t keep still! Then as said, Thursday is Race Club this week … because Friday sees Nick & Catherine’s wedding paddle – which we’re anticipating will be from Papermill Lock at 5pm, followed by a BBQ and a night’s camping at The Hurdlemakers Arms. We can’t wait!