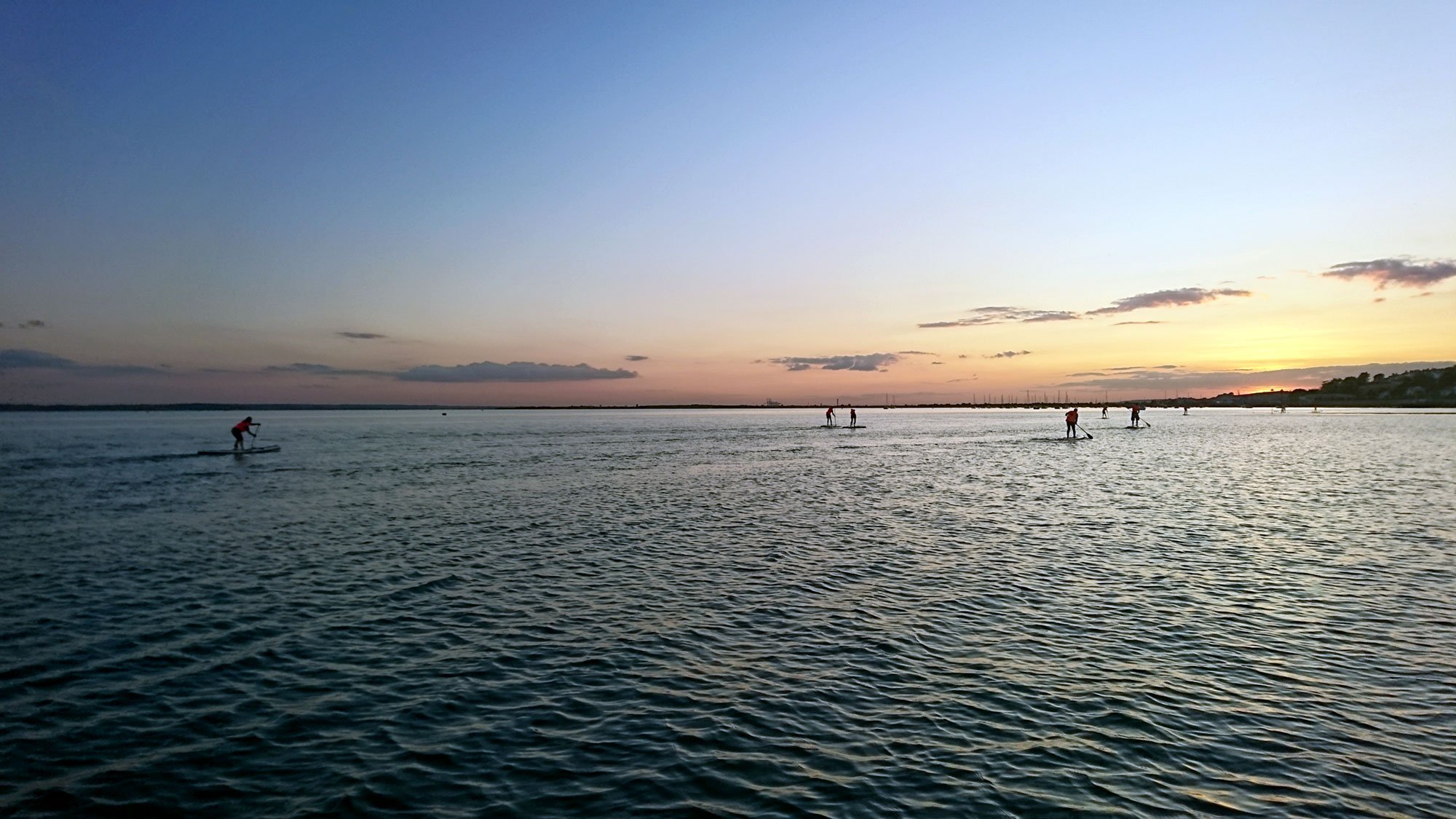 As autumn begins to take hold, we’re looking back on what’s undoubtedly been our busiest summer in seven years of running the club and school; it’s been brilliant but non-stop with Wednesday night SUP Club, weekly Race Club, fully booked learn to SUP lessons every weekend, plus our legendary late August Bank Holiday SUPstock weekender, and even a nuptial SUP on the day of Nick and Catherine’s wedding…

Of course SUP Club remains our weekly focus, and it really has gone from strength to strength this year with over 40 paddlers most weeks and even the quieter nights attracting 25+. Way back in July, Wednesday evening’s weather was treating us well and allowing us out from Hullbridge for a trip into Battlesbridge and back, including a halfway drink at the Barge pub, followed by kebabs at the Smugglers! The following week was a big trip down the River Chelmer as 41 of us cruised out from Papermill before a big dinner at the Six Bells. Then as the heatwave hit at the end of July we had a huge night at Chalkwell for a SplashySUPyBarbyQ where we hung out on the rigging green late into the night after a brilliant trip into Old Leigh (with a swifty at the Mayflower) before a super-chilled paddle home via Leigh Creek… The weather wasn’t so kind to us on Wednesdays throughout August, with rain on the forecasts most weeks and the wind and tide restricting us to the river for four weeks on the bounce, but we still thoroughly enjoyed ourselves and welcomed plenty of new paddlers alongside our ‘hardcore’ of regulars. Then from late August into this month we’ve pushed the boundaries a little in order to stay coastal – two awesome splashabout fun-&-games sessions tucked out of the wind down the dogleg from Two Tree, including a few rounds of SUPdog and some full-on games of surf hockey, plus a downwinder from Benfleet to Chalkwell in the windiest conditions we’ve ever taken on. Late in the tide with a due westerly wind gusting over 30 knots, we set up and parked at Benfleet station before flying down Benfleet Creek with the wind and tide, before heading on to Chalkwell in the lee of Two Tree Island – an awesome paddle in itself, but then our seal friend Dave Sanchez stole the show as he hitched a ride on Lisa’s board as the sun set! Then we all jumped on a train from Chalkwell Station to go collect vehicles, back to Chalkwell to collect boards, then dinner in the Crooked Billet. Quite a night…

And at the end of August, we had quite a weekend at SUPstock – our annual 2-day gathering in South Fambridge took full advantage of the late August Bank Holiday heatwave. Sunday afternoon’s low tide paddle saw 23 head east beneath the blazing sun towards Canewdon into a fair breeze, before stopping for well-earnt refreshments by the mudflats and flying back. Then a late afternoon of relaxing in the sun was followed by the legendary evening BBQ and soirée at The Barn! We were up bright and early on Monday for an 8am high tide trip west to Hullbridge, where 25 of us stopped at the Anchor for breakfast before heading back to camp past the bank holiday pleasureboat traffic as the sea breeze developed. Huge thanks to Andy and Jo for hosting us for a third consecutive year… Find a gallery of pictures here.

Rewind six weeks, when mid-July saw Nick & Catherine become Mr & Mrs Rainbird – and the happy couple included us in their wedding day with a very special nuptial SUP! Click here to find some shots from Friday evening’s wonderful wedding paddle – fascinators, bow-ties, even a full dinner jacket couldn’t upstage Catherine’s orange paddle veil and skirt, or Nick’s top hat. After, we hit the Hurdlemaker’s Arms for an amazing BBQ reception where we partied until dawn!

Meanwhile, pretty much every weekend has seen us running fully-booked learn to SUP lessons at our fantastic beginner venue of Paper Mill Lock up on the River Chelmer. We just brought our BSUPA Ready to Ride teaching season to a close last Sunday, with two final sessions in glorious sunshine bringing the last of over 250 new customers through our BSUPA school this year. We’ll be back with more beginner paddleboard lessons around Easter next year, and we already have a contact list building: just email [email protected] to be added to the list and alerted when we start scheduling 2020 courses in spring. Well done to everyone that’s learnt with us this year – and big thanks, also, to our two superstar instructors Trev ‘Coach Nacho’ and Ian ‘E’ – we really couldn’t have done it without you…

Talking of superstars, we’re so proud of everyone who’s been coming to our weekly Race Clubs this season – it’s really taken off this year, with around 15 budding SUP racers doing their thing each week, and this Friday 20th sees the 12th and final session of the summer. We’ve been approaching it a little differently this season, with a free technique workshop followed by a £5 c. 4km time trial … which has gradually evolved into full-on racing with mass starts, as everyone’s confidence and racing competence has improved over the summer. Our free workshops have covered everything from stroke sequencing, cadence and drafting to racing turns, starts and tactics – and everyone has improved their performance in the time trials, with some shaving 10-minutes+ off their 4k times! We’ve run distance and technical courses on both the river and estuary, and these last few weeks everyone’s loved moving from the individual TT starts to ‘race-ready’ wave starts with mini fleets jostling on the startline, and fun, friendly racing around simple courses. Find results of each of our time trials / races on our Race Club page.

So we’re feeling pretty well prepared for the British SUP Club Championships at Bray Lake in a couple of weekends’ time – we’ve entered a team every year since the very first BSCC back in 2013 when we had just five riders. As ever, we’re primarily there for fun not glory, but this year our full team of 20 are ready to do their best for Team SUPsect and hoping to defend our 5th place overall from last year. Having raced and podiumed at all six BSCCs to date, this year El’s focus has been coaching the SUPsect squad at Race Club as well as planning and running this year’s junior and sub-12′ novice racing at the Championships. Plus Trev, Barry, Kev and Paul ‘Chippy’ are volunteering as marshals – kudos to them all!

Talking of racing, this coming weekend is the last event of the UK SUP endurance series with the Great Glen Challenge where Dunc, Al and Kate will join around 75 other long-distance paddlers from across the globe in a 92km race across Scotland from Fort William along the Caledonian Canal to Inverness via Loch Ness, Loch Oich, and Loch Lochy McLoch-face… Stay tuned to our social media – @SUPsect on Facebook and @SUPsectUK on instagram – to see how we get on…