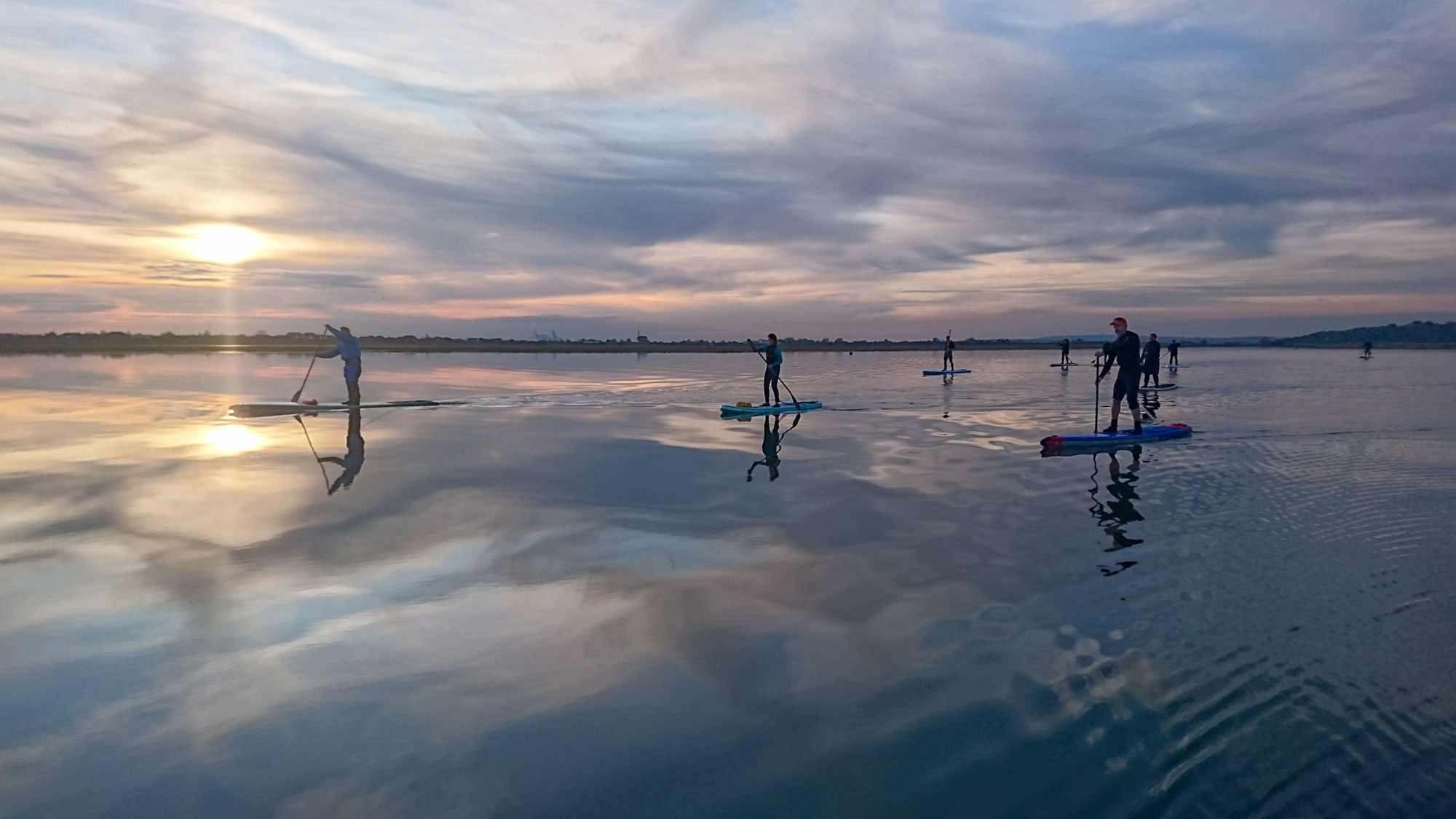 While winter’s certainly not over yet, with daffodils nodding in the gales and sunsets gradually sliding towards evening, it’s certainly beginning to feel like we’re the bright side of midwinter and spring’s not too far away now. So time for a long overdue update! It’s been a relatively busy winter for us – of course, school’s out, but we’ve still found plenty to do. Since our last blog we’ve dressed up for some fun festive SUP Clubs, got together for mid-winter socials, scored a few perfect freepaddling sessions, raced a couple of rounds of our EASI winter series including the SUPsect Hullbridge leg, and started to implement one of our big 2020 visions with the first couple of litter-picks and the inception of the SUPsect Water Wombles…

First up let’s rewind all the way back to last October 2019 (!) and the week after our regular Wednesday evening SUP Club season finished with a night paddle to the pub, Halloween fell on Thursday 31st. A dozen of us paraded our ghoulish garb through Chelmsford city centre on the Rivers Chelmer and Can before a super halloween feast at the Fox and Raven. Costume of the year hands down had to go to Welly with his amazing coffin and cadaver outfit… Find pictures on Facebook.

The following month, November saw some weekend get-togethers with Saturday SUPplements and Sunday Service SUP Clubs. Saturday 16th was a mirror-flat paddle for eight of us from Hullbridge to Battlesbridge and back, with a relaxed half way stop at The Barge Inn. Then on Sunday 17th, eleven of us enjoyed maybe the best conditions we’ve seen all year with a sublime Two Tree Superlap from Chalkwell. Photos on Facebook of a pretty amazing winter weekend. Plus in early November, we held our first ever Secret Cinema where Coco Southend screened Point Break for us on their huge LED screen while over 20 of us enjoyed dinner and chat on a Wednesday evening. Then in late November, we hit The Royal Tiger, Rettendon for another 20-strong curry club and catch-up.

Not so long after, it was time for our Christmas paddle – and having planned around a high tide we were lucky enough that the forecast fell well for a coastal parade to kick off the silly season on Sunday 1st December. Twenty of us had a lot of fun getting into the early Christmas spirit: Santas, reindeer, elves and even a giant turkey turned quite a few heads and got some cheers and rounds of applause on our way into the Crooked Billet pub in Old Leigh for festive refreshments, before parading back to Chalkwell. Check out the Facebook pic gallery.

The week following, we finally got to kick off our EASI (East Anglian SUP Initiative) winter series of racing with the Norfolk leg up on Hickling Broad hosted by Norfolk Outdoor Adventures on 7th December. (Unfortunately the planned first round at Frangipani was scuppered by high winds and has now been rescheduled to 25th April 2020 at the TriFarm in Boreham.) In the end we had a great day on Hickling – ‘Welly’ Steve and ‘Step-Back’ Stu were neck-and-neck at the front of a strong Racer fleet, with Steve finally taking a hard-fought win ahead of Stu a close 2nd. In the Experienced fleet, Dunc was super-happy with 2nd behind an untouchable Kelvin from Suffolk but ahead of Barefoot Steve in 3rd and host Martin (NOA) 4th, with our Al 5th. Find full results on Webscorer.

A fortnight later, our infamous SUPping Club Christmas Crawl festive drinkies get-together was 20th December – and we had a cracking night down in Old Leigh. Although we’d planned another pub crawl along the cobbles, in the end the Mayflower pub proved so comfortable for us to pretty much take over that we stayed there until closing, with maybe 30 SUP Clubbers in for a drink through the course of the evening. After hours, several of us climbed the hill into Leigh for nightcaps at the Blackcat Cocktail Bar. Pictures and stories from the night have been embargoed to protect the innocent!

Beyond Christmas and into the New Year, bright weather and light winds allowed plenty of our paddlers to get out over the holiday season – our own instructors Trev ‘Coach Nacho’ and Ian ‘E’ calling some super social paddles from Two Tree Island on the Thames Estuary, Hoe Mill Lock on the River Chelmer and Hullbridge on the Crouch via our 50-strong messenger group of regular paddlers. Later in January, on Saturday 25th, ten of our crew scored an amazingly flat dawn patrol paddle on the Crouch from Fambridge with Coach Nacho – but the previous week from 20th January had been sunny and still, which allowed the skivers amongst us to get out for some classic mid-week winter sessions: Monday was a trip down the Ray to Seal Point from Two Tree, Tuesday saw Dunc and ‘Surfer’ Steve bolt down to Bracklesham Bay on the South Coast for a mellow few hours of fun-sized, long-period, super-clean surf, then Wednesday was a grey but beautifully glassy day to run the 7.5k Hullbridge to Battlesbridge loop – another great opportunity to scout the route for February’s EASI race…

Unfortunately, while the route itself is a perennial favourite of ours and didn’t disappoint, we were struck by a shocking amount of rubbish on some of the banks. Last year’s heavy rains and this year’s storms and associated surging spring tides had washed an alarming amount of litter onto the tide-line. It’s not the first time we’ve seen plastic, cans and other rubbish around – and we’ve long intended to do something about it – but we’ve never seen anything like this much, and the sheer volume left us in no doubt that we needed to clear it up. And soon… We put a quick call out on our messenger group, and that Saturday 1st February we had seven conscientious litter-pickers on the bank of the River Crouch where we collected over 20 bags-full of rubbish with equipment kindly provided by Brown & Carroll London (and roadside collection arranged with Rochford District Council). Find photos here. The following Friday 11 of us took to our boards (well, our school fleet of Red Paddle Rides!) for another litter-pick from Battlesbridge from where we extracted another 30+ sacks full of litter, again with Brown & Carroll‘s assistance and extra bags provided by Big Blue Ocean CleanUp but this time collection arranged with Chelmsford City Council. More photos here. These litter-picks are just the first of many we’ll be doing throughout the year on all of the waters that we use most regularly. (In fact, weather allowing we have another proposed for this weekend following what Storms Ciara and Dennis swept in.) To get involved and help us out, on foot and/or on boards, join our new Facebook group – the SUPsect Water Wombles!

So the stage was set for our round of the EASI winter race series – Saturday 8th February up at Hullbridge. Quite amazingly, the day Storm Ciara hit most of the country, we scored an ideal forecast ahead of the winds and rain hitting Essex late in the evening. Just a moderate westerly breeze made for a decent push up to Battlesbridge and back for our 7.5km main fleets, plus a 5km novice route, with some satisfyingly close racing all-round. Kudos to Kelvin (Suffolk) for the overall win, followed by Mark (SUP Fitness Nottingham) 2nd and our Dunc (SUPsect!) in 3rd. We’re super-proud of ‘Welly’ Steve who won his category on his birthday, followed by ‘Step-Back’ Stu and Nick for a full SUPsect Men’s Racer podium. Anni took the Women’s Experienced honours, with her Frangipani teammates Mary, Helena and Helen making 1-2-3 in the Women’s Racer cat followed by our Helen in 4th. Oliver won the Men’s Novice, with Robert 2nd and our Rob ‘Piña’ 3rd. Tallington’s Jodie took the Women’s Novice, with NOA’s Nat 2nd. With massive thanks to all of our volunteer stewards, supporters, pre-race river-cleaners and of course the 29 racers themselves (including nine from SUPsect), find a cameraphone gallery here and full DSLR gallery here. Plus look out for some drone footage soon too! Meanwhile find full results on Webscorer.

And what’s coming up? Well, unfortunately this coming weekend is looking more weather-affected by the minute – at the time of writing, Saturday’s Suffolk round of EASI racing is forecast very windy indeed (so racing TBC on Thursday 20th via East Anglian SUP Initiative). We’re hopeful for, but still not completely confident about, our proposed litter-pick on the Crouch on Sunday too: keep an eye on the SUPsect Water Wombles group for confirmation of that (subject to forecast). But such is life in February – you have to roll with the weather… Early next month, it’s Barefoot‘s turn to run their EASI race on Saturday 7th March up in west Norfolk. Then we’ll hopefully be running some social paddles as spring begins to spring, and will definitely get another litter-pick or two together before the clocks go forward … which then means Wednesday night SUP Club season begins on 1st April this year: hurrah!

Is it OK to go paddleboarding again?