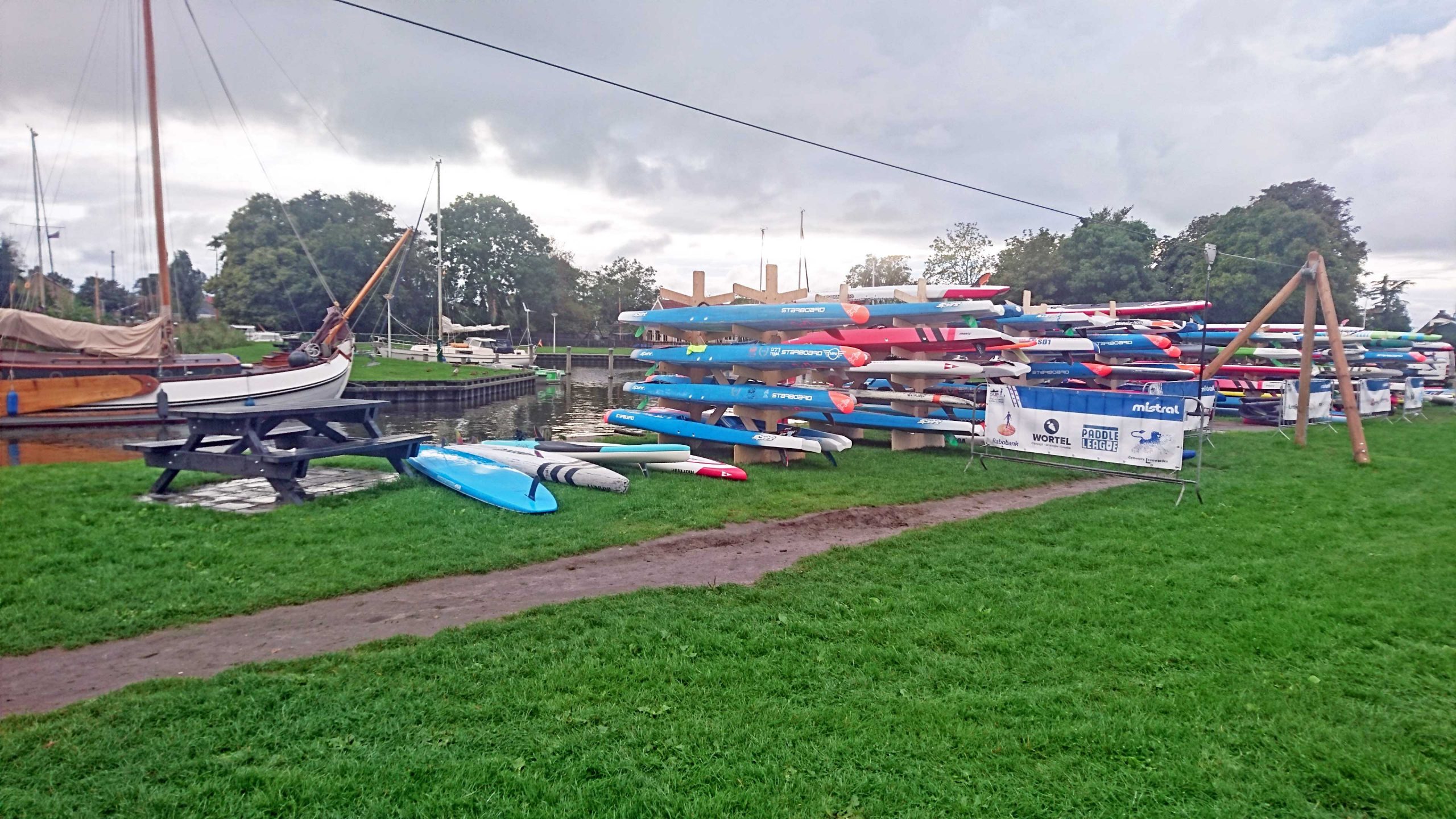 Here we are in another cute Dutch town, Workum, at the end of day two of the 2018 SUP 11 City Tour – the longest stage of the week at 45.5k. My day’s gone well, I started off back on plan and racing relatively cautiously but by the second half got pretty competitive to post what I’m pretty sure was a top 10 finish in the masters fleet at the end…

It was an inauspicious start: pouring with rain overnight and into the morning. While I thought I was well on top of everything, with 10 minutes to the briefing the realisation dawned that I’d totally forgotten to pick up my GPS tracker, from the event HQ boat, which was at some undisclosed location about half a km away. A quick sprint across town saw me sent straight back to where I’d started as plenty of us hadn’t made it over there so the trackers were despatched to the briefing to find us instead. Not the calmest of pre-race routine. So again I was pretty happy to pull myself back together in time to paddle over to the startline and secure myself a decent position on the left hand side of the grid. I can’t pretend the start was nice, fun, or particularly pretty, but I got away safely and started looking for suitable tails to follow.

Soon enough, with the ‘elite’ lead draft train charging away I saw the makings of the second train and tagged onto that for the first k or two to get onto the lake. Thankfully the wind hadn’t filled in this morning so the lake was pretty calm, but still definitely not my preferred conditions – plus the guy driving our train was the charger from yesterday so I knew the pace would stay a little high for comfort – so I elected to drop off the back of the train and focus on getting across the lake at my pace and therefore (hopefully!) dry. That tactic worked, but it meant I was too for off the back of the train to stand a chance of making it back to them as we headed up the first canal: complete with double bounce-back chop from the traffic ahead off the solid sides until we got through town. Nice!

Thankfully, soon enough we hit forest and then the countryside, with the water returned to my preferred glassy state, and I knew I had the whole morning to myself – staying in sight of the train maybe 400m ahead yet with no chance of catching it, with just passing pleasantries to the back-markers as I overtook them, and from the elite guys after about 90 minutes as they came steaming past me! I quite enjoyed it; my pace wasn’t bad and there was none of the stress of staying in a train and I could see that a few of the masters ahead were suffering from the speed and beginning to drop off by the time we got to the rest stop.

By now it was raining, which seemed to trouble many people but I had a nice new long-sleeved rashvest on (thanks El!) that I’d been dying to use so was perfectly happy. After chocolate, water, painkillers and a surprisingly pleasant cup of watery soup I left many people faffing about with extra layers and waterproofs and departed bang on my allotted 15 minutes to get into the second half – with nearly 25km covered I was still feeling good and ready to push a little harder now. The wind had picked up maybe an hour previously by the third (smaller!) lake of the day, and having hit the coast I knew we were in for some pretty solid headwind stretches and was ready for them. Winding alongside the dyke I spent a little time with my Naish Javelin pal from yesterday (I asked his name this morning, but it was very European so I instantly forgot it, and now I think we’re too friendly to be able to ask again!) but he’d done a lot of work at the head of the morning train hence didn’t have the power to stay with me – so waved me on ahead.

Next I spotted one of the Swiss Fool Moon guys from yesterday, just behind the now 5-strong second train, which suddenly seemed much closer than it had all morning… I kept it in range as we headed inland, then when we turned north into the wind I noticed it slowed and started snaking across the river – I figured they were probably taking a breather before the bell (in the unbelievably pretty town of Hindeloopen: we need to ring all the bells in the cities we don’t stop at to complete the challenge) so I saw my chance to finally get onto the back of the train. It took maybe 20 minutes at full-on max pace to catch them, but I did about 1km before the bell, which bought me a little respite before the pace picked back up for the final 7k charge into Workum.

As the speed increased, it started to trouble the two Fool Moon guys including Mr Total SUP (who’s maybe called Matt?) as he dropped off the back – I was still feeling strong so ended up second in the depleted train. And actually by the finish line there were just three of us left: the South African dude was toast and it felt like I could have overtaken the driver too had manners not dictated that he should take the higher place having done the majority of work for that group all day (he’s a 5-time 11 City veteran who just completed the non-stop so seems pretty high up the pecking order, and I’d rather a powerful friend than foe these next few days!)

So yeah, that was that – then it was massage, food, water, go get the van from the start, more water, more food, pain relief gel … and I’d better get some painkillers down now too. Have to say massive thanks to everyone that’s sent their messages and notes and gestures of support whilst I’ve been out here, and even watching my progress on the tracker: it really does help with motivation on the water! My board – Red Paddle Elite 14′ x 25″ – has been pretty amazing too and feels totally competitive against all the carbon: the fact that it’s inflatable seems to bother some other people infinitely more than it bothers me! Tomorrow we go to Franeker. Sounds like we’re starting with a 12k time trial then another group start (joy!) for the remaining 30k stretch. Looks like crosswinds all morning, before we turn onto what everyone says is a properly major shipping canal (the boats I’ve seen so far are huge, but apparently these are more like container ships!) for a bit of a downwinder. Should be fun?!? 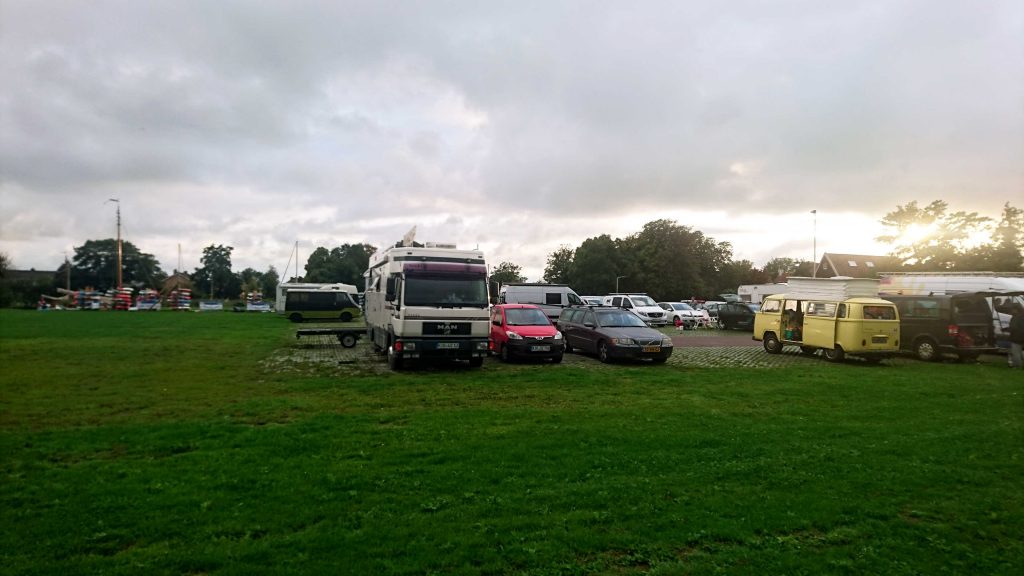