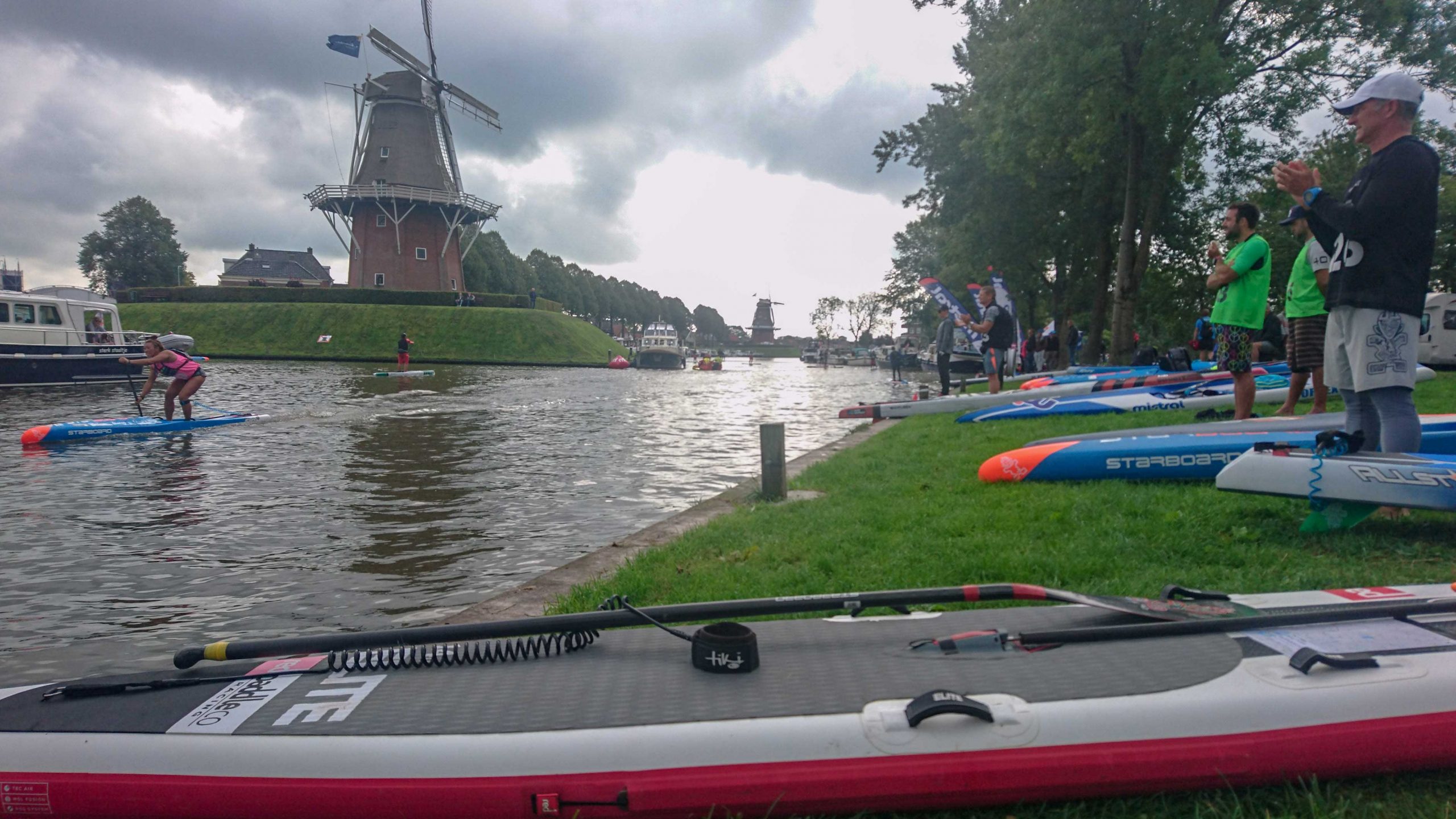 Mission accomplished! I finished the 2018 SUP 11 City Tour – and today’s 27k time trial turned out to be the hardest paddle of the week, I think the hardest I’ve ever paddled, into a brutal headwind pretty much all the way back into Leeuwarden. But it really couldn’t have gone better for me…

The morning started a little later and a little more relaxed than usual: no need to worry about packing a rest bag as there was to be no break on today’s stage from Dokkum to Leeuwarden. Nowhere to rest and nowhere to hide as it turned out, but more of that in a minute. Meanwhile after the briefing (start in reverse order at 1-minute intervals, no drafting, mind your heads on the bridges, enjoy, and be nice to the single day stage tour competitors!) I had over an hour to wait until my start at 11.01, so it was great to chat, joke and hang out with many of the other guys – including legendary Waterborn west countryman Crispin who’s always full of useful advice having competed here plenty before – as we watched the women’s fleet depart.

Then it was our turn under the windmills as race director Hans let us off one-by-one, then we headed straight under a low (crouch-down) bridge, then a very low (lie-down) bridge, then turned south-west directly into the building south-westerly wind. As South African Shayne, who was one place behind me, had dropped out I had a 2-minute gap to close down on Naish Javelin Reto ahead of me – while a minute behind me I needed to get away from Stéphane the Fool Moon Swiss, to close an overall gap of I still don’t know how much. We’ve all become super-friendly ‘rivals’, eating together after the race every day and talking through our days on the water – in the case of Stéphane, despite me having very little French and him even less English! He is still the guy standing between me and a top 10 finish though, which is way more than I dared dream of in my first 11 City, so my sole objective today was to go as hard as I could manage in an attempt to overhaul him.

And that I did – from the off I safely negotiated the bridges, then when I hit the headwind and saw the guys ahead slow down, I went as high a pace and cadence as I could hold and immediately set to closing in on Reto. Counting the number of strokes between us I could gauge if I was catching him and glancing back could then work out whether Stéphane was closing on me – within about 10 minutes it was clear that I was (catching Reto) and Stéphane wasn’t (closing on me) which was all the impetus I needed to switch my pain receptors off and engage beast mode. Helpfully, Brazilian monster Bruno was on the charge again trying to make up places in the top 5 so after he’d passed me I used him as impetus to keep the power on. Soon enough maybe 20-25 minutes in I was past Reto, who had meanwhile closed in on Andrew (Smith, who with his wife Maria and daughter Gemma have really looked after me this year, showing me the ropes on the first couple of days and helping ferry me to the van and event a few times this week) and Goran (my Swedish Red Paddle buddy, who’s also onto his second 11 City and planning to take on the non-stop next year – although super-friendly as he was, he clearly wasn’t anticipating another inflatable would turn up and beat him!) More importantly, I’d lost sight of Stéphane behind me, so it was just a question of keeping the power on … for another 3 hours.

It was 12k until the ‘famous bridge’ (which isn’t the mosaic one I expected it to be, but a little wooden thing the 11 City skaters historically met each other under going in opposite directions) where the route headed west for a few k to give us a break from the incessant headwind, which was around 18 knots by now – and who knew Holland was so flat?!? There was seemingly nowhere to hide from it: we were tucking into the reeds, swerving behind moored boats, I swear I saw someone try to find shelter behind a duck! During the respite I went past Ed, a wonderfully ‘crazy’ Dutchman who was also self supporting so we’d got to know each other pretty well lifts back to our vans after stages (along with a friend from the British circuit, Anglicised Dutchman Martyn Guerts, who’s had an amazing week in the Tour category, with some top 3 finishes despite cracking ribs during a fall on the lake on day 1, which he followed with another fall onto the same ribs on the startline of day 4!) I also took Takaaki, the Japanese who was going strong on his Starboard Airline, plus I’d seen and briefly chatted to fellow Brits and long-distance legends Alistair and Alison Swinsco and my good travel buddy Candice from Bray Lake, who’s also had a strong first 11 City on her Starboard blow-up, on the way through.

Then, respite over, we turned south-west again towards Leeuwarden, onto a small mere and into an even stronger headwind which must have been gusting 20+ knots by now, to be greeted by a veritable war scene – along with the stronger women and backmarkers of the masters fleet, there were Tour riders struggling into the wind and day stage entries being blown sideways and even backwards. Although offering friendly greeting and encouragement to everyone on the way past, having popped an energy gel in preparation I just put my head down and dug in as hard as my body would allow into the teeth of the wind – at this point the leader of the Open category had come past, so again he set an example I could aspire to, and we weaved through the carnage. Then came the mosaic bridge (which I still consider the truly famous one) where it was great to get more support, particularly from Ali Pereira who has been another great help this week, as has her bunkmate the inimitable Jo Hamilton-Vale. Talking of support, one of the truly amazing parts of this race has been the cheering, whistling, music and general support from every bridge, canal-side café and vantage point available as the 11 City supporters motivated us all through the 220km distance. Just amazing.

Anyway, our pain was nearly over, just 8k to go from the mosaic bridge and as the route started to approach town we finally started to get some shelter from the wind and speeds could pick back up to 8+kmph. It was getting close, and I have to admit I was getting a bit emotional – but I was still giving it every ounce of strength and power I had left to make my final bid for a top 10 place. As we passed under the final low bridge before the finish, the wave of raw emotion was like nothing I’ve ever felt before – I’d done it. And I’d genuinely loved every minute of it. Even before we were off the water our 11 City crosses were hung around our necks, and I kinda struggled to keep it together as one of the media team (there were loads of them, all from the local university) stuck a camera in my face… After, the familiar drill of massage and food as soon as possible – plus man-hugs for all of my fellow competitors. Everyone’s sense of elation at completing the distance made for a pretty incredible atmosphere where there had already been an overwhelming sense of camaraderie and a true festival feeling all week.

Now? I still don’t know where I came overall, guess I’ll find out tomorrow, but have been told I finished 7th in today’s stage comfortably ahead of Stéphane which is something I’m very proud of indeed. A 6-hour drive and Candice and I hit Dunkirk in time for the 2am ferry so we’re mid-Channel now. Feeling surprisingly fine – if pretty wired. Which I hope excuses whatever nonsense I’ve just written. Thanks for reading! (And thanks again to everyone for the continued support – I hope I’ve done you proud…) 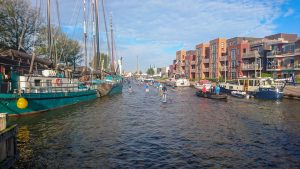 The start of the day tour from the bridge 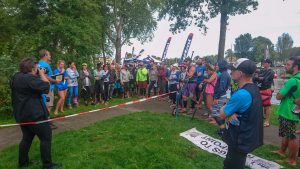 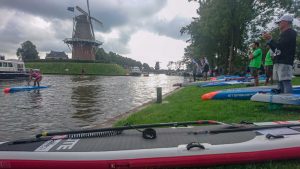 The women’s start, by the windmills at Dokkum