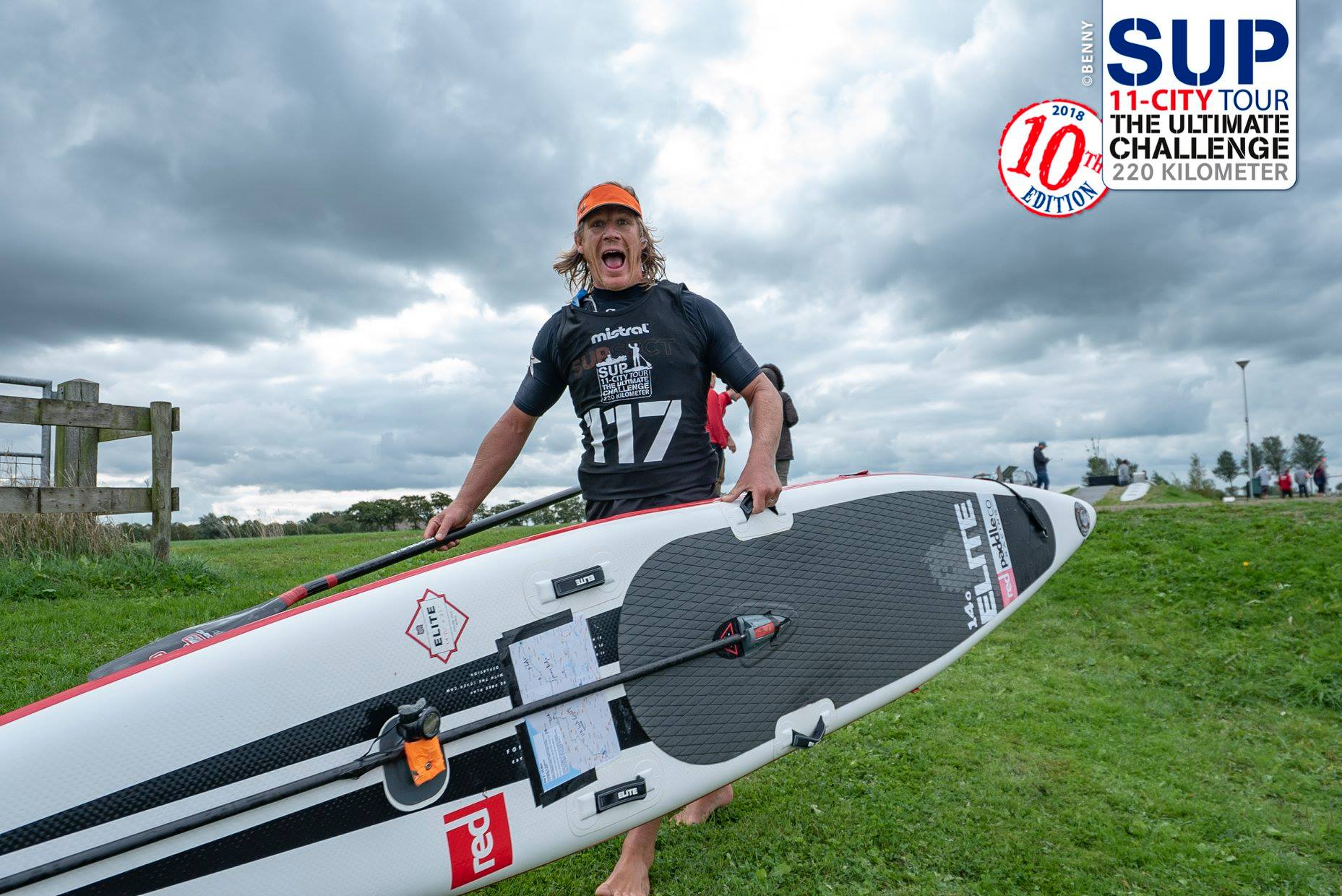 Results are in from the 2018 SUP 11 City Tour – and I’m absolutely delighted to discover that I made 9th place Master in a combined time of just over 25 hours (25:00:46). This is way beyond my wildest dreams for my first attempt racing 220km around North Friesland in Holland: I wasn’t sure I could do it, so genuinely my goal was simply to complete the course … naturally, I had a secret best case scenario, which was top half of the masters fleet. With 34 entries and 28 finishers I exceeded that by way more than I dared imagine. Wow… See the full stats here.

Of course I’ve been looking through the numbers pretty closely! So I hope you’ll excuse some self-congratulatory analysis. But first congratulations to the rest of the British contingent (who I can’t stress strongly enough weren’t my only friends and allies amongst the 28 different nationalities there in Holland, but I won’t test your patience with a list of 40 people’s times and placings!!!) From the top down, mid-way through an incredible season of endurance racing, Alison Rennie also claimed 9th in the 17-strong Divas (grown-up women’s!) fleet in 29:30:04 while my good travel buddy Candice Betts got a storming 12th place finish in 31:34:53. (I think all of these times include the 15-minute breaks?) In my fleet, the Masters (40+) Andrew T Smith (who as I said, along with his back-up crew of wife Maria and daughter Gemma really did massively help support me throughout the event) also took an awesomely strong 12th place in 26:17:02 while ultra-endurance supremo and fellow Red Paddle dude Allistair Swinsco came home 19th in 27:42:24. Into the Open category, returning 11 City legend Crispin Jones of Waterborn finished 7th of 15 in 25:20:13. The queen of British endurance, Jo Hamilton-Vale was actually here to compete non-stop (with Alison, Allistair and Dean Dunbar on a Dragon) but was forced to abandon as Dean suffered a foot injury – hence she jumped into the 5-day Tour category, during which she hung with founder Annamarie Reichman-Totah picking up rubbish around the course, so her time is irrelevant although she totally isn’t as she’s an inspiration to us all! Last but absolutely not least, adopted Brit (although he’s 100% Dutchman!) Martyn Geurts took his cracked ribs to an impressive 6th place out of 22 with 28:34:25 in the men’s Tour, while Jersey boy Rene Raimondo came home 11th in 28:55:22.

Which means (depending on whether or not you consider Elite man James Van Drunen British, which for the sake of my burgeoning ego and his Spanish birth and residence, I don’t) that I arguably finished top Brit. Stoked! And overall, of 132 five-day competitors and teams in a truly international field, including the frankly super-human Elite guys, I recorded the 31st fastest time – which puts me in the top quarter. On an inflatable. Within my class, although the top 5 (the ‘pseudo-elites’!) were in a league of their own, I really wasn’t so far out of touch with the 8th and 7th placed guys (7th being Christian ‘the cannibal’ and then I think 6th was his fellow cannibal from that day 4 train of doom, Miguel) – with my time I’d have finished 5th in the Open fleet, and not last in the Elites! Fair to say I’m very very happy with that… I definitely finished first inflatable, ahead of 13th Master, my new Swedish pal Goran Gustavsson (26:31:13) and Japan’s Takaaki Ishii – and as there were a fair few more of us pump-ups there I heard strong rumour that Annamarie was talking about introducing an iSUP class in future. To be perfectly honest, having really become one with my amazing Red Paddle Elite 14′ x 25″ and taken some good overall endurance results on it now I’m not sure that’s necessary – I honestly feel completely competitive against the full carbon (even 21-inch!) boards: I get beaten by better paddlers, not better boards. A separate class might attract more blow-ups to the event though, so I do see that it could be good for a stronger field (who maybe don’t feel competitive against solids?) Anyway…

I’ve learnt a lot – a lot about racing, psychology and technique, I picked up loads every day. But more importantly I learnt so much about myself: I didn’t know I could dig that deep, push that hard and still keep pushing. I didn’t know I had that level of determination and tenacity to keep working through the pain even when it felt futile or frankly impossible. I learnt that smiling, laughing and other people really help with that. In fact I never really appreciated how much I’m driven by other people – and that went both ways: I hope I helped others around the racecourse and I hope I’ve come away a better person for it. Basically, I realised that my ‘limits’ really aren’t that rigid – and they’re certainly beyond where I previously thought they were! Plus, while it probably doesn’t sound like it as I go on and on about myself here, I have learnt some humility and that I still have a lot left to learn…

Thanks again to everyone in Holland – the organisation, paddlers and support – for an utterly amazing time. It was tough, very tough at times, but I absolutely loved every minute of it: without doubt the best thing I’ve ever done in sport, and I will definitely be back again, no doubt about that whatsoever. Probably next year if possible. The atmosphere around the event was very special, the racing was truly awesome throughout, and the achievement in crossing the finish line felt immense. Thanks too again to everyone sending their messages, gestures and vibes of support over the North Sea from home, it really massively helped. And the one person I definitely couldn’t have done this without is my wife and coach, Elisa – her support has been incredible throughout my 2-year endurance mission towards this event, she’s helped train my stroke, fitness and general technique to the place it’s at now. Thanks – I really do appreciate you all.

And here, if you’ll excuse my vanity, are all of the official pictures I’ve managed to spot myself in so far! Consider it like a game of Where’s Wally?!? One particularly is very tricky / borderline… Thanks to 11 City Tour on Facebook for these images. Also, have some quick snaps of my GPS track and Suunto watch data – I tended to start my watch 5 minutes before the start, not pause it during the break, and often forgot to stop it for a few minutes after finishing! Have been working towards operating at a vaguely sensible heartrate by focussing on higher power / lower cadence and more efficient technique, so pleased to see some lower averages. Peaked at 203 off the startline on the first day, which is really very good for me in that stressful an environment!

(Oh, and in case you’re wondering, I’m surprised to discover that I still feel perfectly fine. Actually it must be down the the dails sports massage – never had one before last week but now realise they are magic. Barely aching and in no significant pain at all, even with no blisters left at all. In fact I’m feeling better now than when I left for Holland! It’s a tad windy to tempt me out today, and I should probably rest this week, but I’m already quite up for another training paddle…) 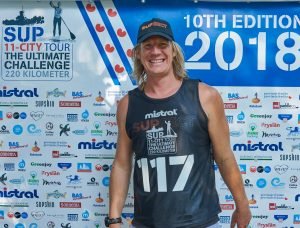 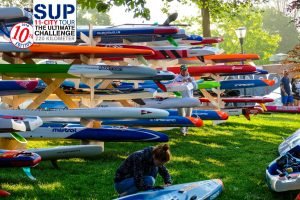 Board racks in Leeuwarden, day 1 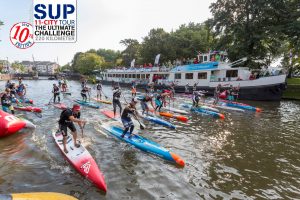 Day 1 startline, Leeuwarden (the red Fanatic on the far side and mid-front row on the orange 3 Bay are Miguel and Christian, the two ‘cannibals’ from the 2nd train on day 4!) 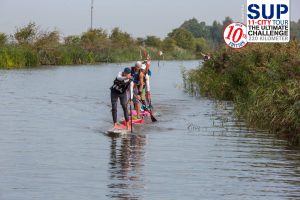 Working (covertly!) with ‘Naish Javelin’ Reto the Swiss on day 1. Head of that train is South African Shayne, on a 2019 Naish Maliko, who retired with an elbow injury after I overhauled him on day 3.) 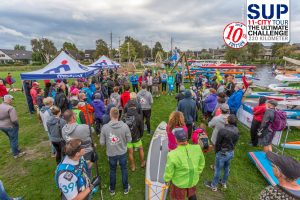 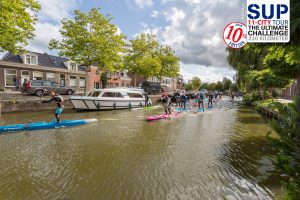 Soon after the day 3 mass restart, I don’t know where – somewhere between Workum and Franeker! That’s the masters winner in the lead and Stéphane Fool Moon the Swiss out left on the green board and on the charge to make the lead train and take more time on me that day 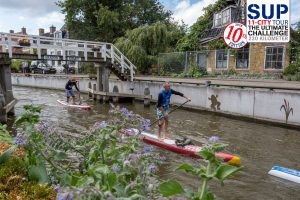 Charging towards Harlingen on my lonely day 3 afternoon, the guys in blue are Tour fleet who had a ‘normal’ stage that day and started like an hour before us 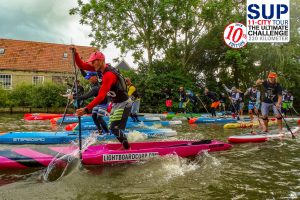 Moments after the gun on the Franeker startline, the narrowest of them all, on day 4 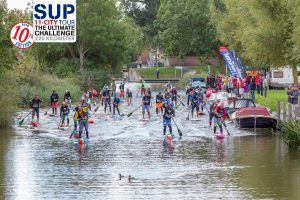 Not in a bad position coming away from the Franeker startline (which I was almost beginning to enjoy by now!) on day 4 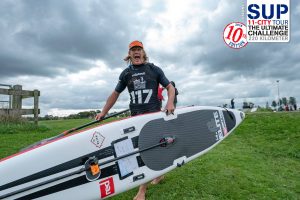 Portage around the lock 12k into day 4 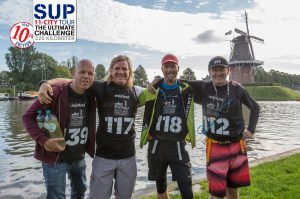 Before the start on day 5, Dokkum. That’s Ed on the left (the crazy Dutch, my fellow self-supporter who I shared some van-collecting trips with), 118 is my fellow Rad Paddle dude, Swedish Goran Gustavsson. Far right is a nice South African fella, Craig L’Estrange Girdlestone… 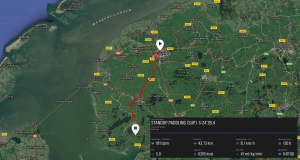 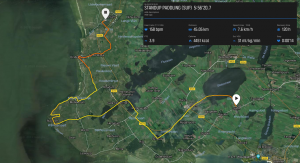 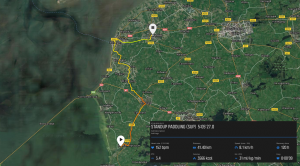 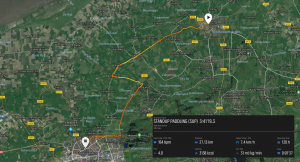