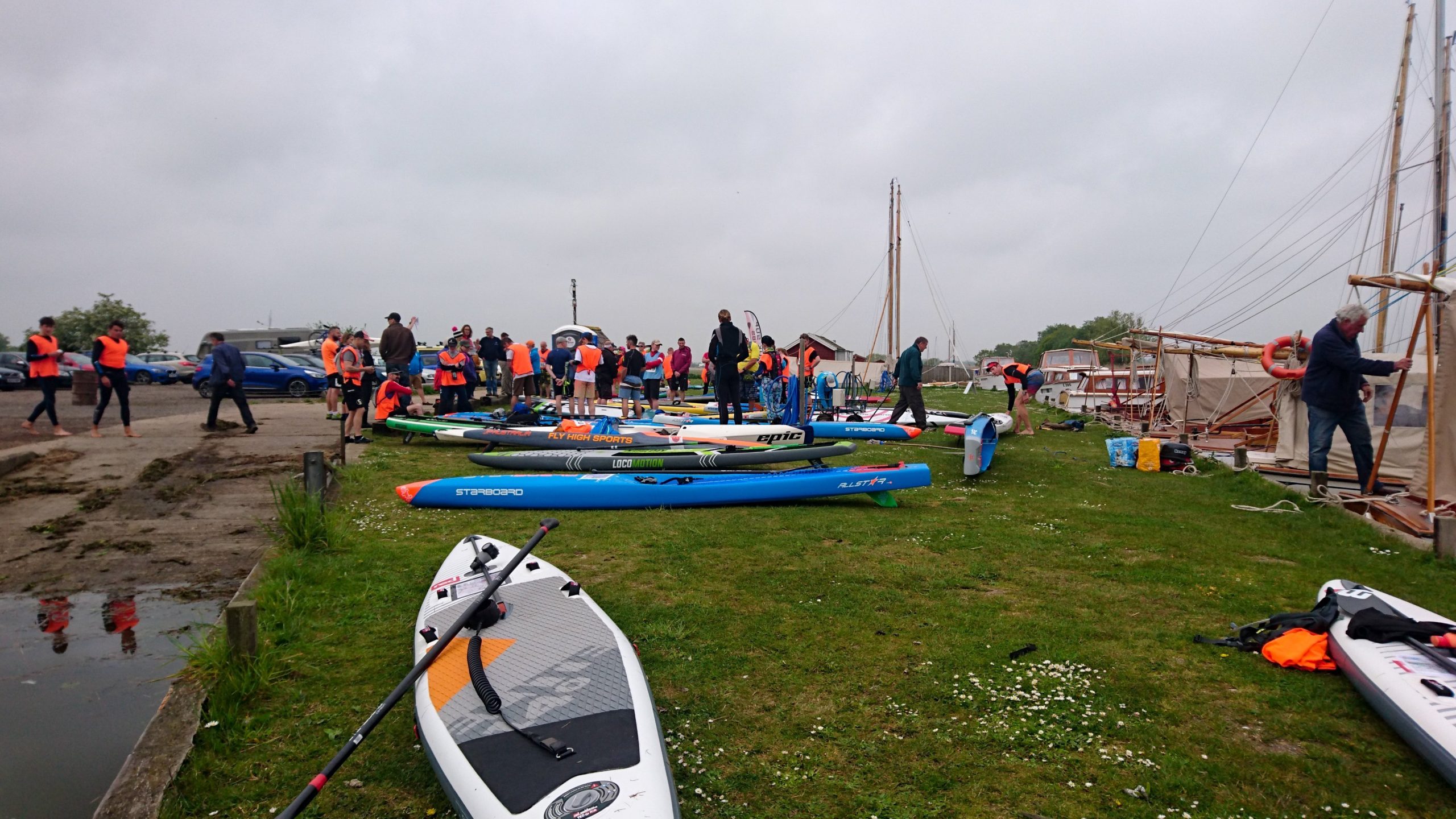 With huge thanks to Jo Hamilton-Vale – plus of course Ali, Mark, Pete and all of the amazing volunteers – a few of us are still buzzing from two weekends ago at this year’s 70km Norfolk Ultra race; part of the UK Paddle Endurance Series (formerly UK SUP). We’re very proud to say that SUPsect’s three paddlers came home with a trophy each: two firsts and a second. Plus, after times were adjusted for the handicap system, I’m stoked to have been declared overall 2-day event winner!

Racers started arriving on Friday, with camping moved just a little way to hosts Martham Boats‘ soon-to-be glamping meadow – still just a minute away from the river. I didn’t land until late in the evening, around dusk, when I headed to the far side of the field to park up next to Al, who’d arrived half an hour beforehand. It didn’t seem too late to be pumping my board up (Red Paddle 14′ Elite, of course!) so I got to it, whilst chatting to Al as well as catching up with Candice (my 11 City travel buddy), Sam (her fellow instructor from Bray Lake) and Grant (Polkerris‘ own ‘SUP Boy’!) who’d wandered over to say hi. Board pumped, it was time for carb-loading in the shape of tuna-pasta-surprise, then bed…

Saturday dawned cloudy but warm enough and actually pretty nice for racing after the last couple of years of scorching sunshine and killer heat at the Norfolk Ultra. Another refreshing change was there was no need to relocate to Acle for the start, as both day stages would be circular this year. So it was a slightly more relaxed hour of prepping ready for the briefing and 10am race start. This year it was just three starting waves – prone, SUP then sit-downs – which made for a pretty busy paddleboard startline as the men and women lined up together. I got away clean enough from the second row and chased the two early leaders (Belgian Dirk and Guernsey Frenchman Fred) as I got into my rhythm, pretty soon Will (Jersey boy!) came charging up on my left obviously intent on joining the top three by Potter Heigham … having suffered the consequences of going too hard too early in previous races, I was perfectly happy to let him go. The first stretch of 11km into Acle was against a shocking amount of stream as the full moon exacerbated the usually light tidal flow on the Broads, so it was a relief to finally turn at the first checkpoint and pick up some proper speed at last. Not being great at looking over my shoulder, this was my first real opportunity to gauge what was going on behind me – next on the water, my 11 City campmate Martyn was looking good, followed not far behind by our Al going great guns on his Red Paddle iSUP (I’ve been coaching Al since last autumn, so it was as satisfying as it was alarming to see him still within a few minutes of me 90 minutes into this race!) Steven the kayaker had already taken the overall lead on the water, but Martyn and Al were both still ahead of the next two sit-downs: Peter in his surfski and OC1 Ben. Towards the back of the fleet, Kate on her Starboard Airline was already ahead of the other two female iSUPs: Sarah-Louise taking the opportunity to test an O’Shea Expedition and Barefoot newbie Michelle on her Starboard Tourer. Things weren’t too different by the halfway mark at checkpoint two – out front Dirk had a bit of a lead over Will in second place then Fred maybe half a minute back. And so we set in for the upwind grind into Martham Boats at 30k – back on the straighter River Thurne, I regained sight of the leaders, which was suitably motivational to keep the power down to checkpoint three back where we’d started. Slowing only briefly to jettison an empty gel packet, it was time to head north to Hickling Broad for the last 10k. The turn came at the top of the broad, on the way to which I was surprised only to see Dirk and Fred heading back towards me – it turned out Will erroneously went straight on after the checkpoint, losing him a few minutes and dropping behind me. I resisted the temptation to join Suffolk support crew Kelvin and Neil at The Pleasure Boat Inn just by the buoy, but as it turned out later Karl and Martin (the vets winners, infamous for their ice-cream stops at previous events) had outdone themselves and stopped for a pint mid-race! So on my return down Hickling Broad I soon saw Will, a little while later I was impressed to discover that Al had overtaken Martyn – but kept my focus on the lead pair who I could still see in the distance. Suitably motivated for the last last couple of k, I was super-happy to finish day 1 within a few minutes of Dirk on his carbon JP-Australia and 90 seconds adrift of Fred on his Starboard Sprint. A quick shower (Helen at Martham always leaves one of their little cottages open for us to use, which is greatly appreciated!) and it was time to start eating and rehydrating – which basically continued throughout the evening as Jo, Ali and co lay on a big spread so everyone can get together and discuss the days racing…

Day 2 dawned foggy. At least by the time we were up and about it was beginning to break, but the non-stoppers had gone off at 6.30am so must have endured hours of reduced visibility and chilly air as they commenced their marathon paddle… Amazingly, as we were briefing before our 9.45am start, the leading paddler – K1 sit-downer Onno – came charging through like a torpedo after 30k of paddling! A quick round of applause later it was our turn to get started: again, three waves (prone, stand-up and sit-down) but this time just a minute apart. Our start was a little less chaotic on this second day as everyone now knew where they were in the pecking order so on the whole seemed ready to slip into their ‘natural’ positions on the water. Fred went out fast, obviously with a point to prove from the previous day, Will also started well but I was surprised to see Dirk was level with me – I was happy to hang back in third or fourth on the water, he obviously not so happy as he set about chasing the lead pair down while I settled into my rhythm. Soon enough Dirk had overcome Will and caught Fred not too far after Potter Heigham, where it has to be said he did seem to take a break and draft Fred for a few minutes (there’s a simple drafting rule at the UK Paddle Endurance races: it’s not allowed!) With the tide flooding again, it was quite a relief to turn right at Thurne to finally get a push up to the River Ant and onwards to How Hill. Although Fred and Dirk were now hiding out of my sight around the corners, I found myself gaining on Will to the point that I was able to draw level and overhaul him just beyond Ant Mouth – feeling strong, I kept the power on after Ludham Bridge and was able to drop him by the halfway checkpoint. Heading back, I could see a comfortable gap … and not too far behind it was great to see Al 4th placed SUP. Greeting and encouraging the racers is always a good way to pass the time on the way back down the Ant – and it has to be said, back down the fleet today Kate was looking stronger as leading women’s inflatable. So to Ludham Bridge – notorious for its queues of leisure boats, where I’d been forced to stop last year. As I approached, the bridge was clear as a boat had just gone through in my direction. Although I could see a couple of stationary boats beyond waiting their turn, it was very hard to say who had right of way, so as I was already moving and they didn’t seem to be, I kept on full power. Of course, the lead boat also decided to start moving, and in the end we passed within a foot of each other as they entered under the bridge! As I exited it was clearly the right call as there was a further queue of seven boats behind… On the way back down to the main River Thurne, I started seeing the non-stoppers coming the other way – K1 Onno was clearly some way ahead, but Jersey SUP legend Andre was looking great as first solo SUP (behind the French tandem!) And so, turning onto the Thurne I knew it was less than an hour to go, and buoyed by the fact that on the straighter river I was back in sight of the two leaders (who did seem to be very close together!) my pace increased and I felt gradually faster as I approached Potter Heigham. Meanwhile, it turned out Karl and Martin had stopped at another pub for another swiftie – and responding to my joking about them stopping for a roast dinner, even picked up a Yorkshire pudding to award to me after the race: delicious! Back on the racecourse, once I was through that last bridge at Potter Heigham I was even able to find more energy to up my speed a few tenths of a k for the last mile or two and finished strong and happy – just a few minutes behind the lead pair. Looking back down the river I was pleased to have just managed my tertiary objective for the day: not to get overtaken by flying K1 non-stopper Onno, who was next to finish, closely followed by Will who I had gapped by a good few minutes which to my mind justified my finishing ahead of him in the overall standings (rather than merely capitalising on his navigational mistake from the previous day). It’s a great feeling to finish one of Jo’s endurance races as there’s such a great communal atmosphere of joint endeavour (as opposed to the underlying competitive edge and ‘needle’ of the shorter course races) – the finishers congratulate and cheer each other and get an amazing level of support and encouragement from Jo, Ali, Mark and co, it really is a special thing…

I finished the 70km Norfolk Ultra 2019 in 8:38.17 altogether to claim 1st iSUP (2nd SUP and 3rd overall) – Al was 2nd iSUP (5th overall) in an impressive 9:07.31, while Kate was fastest of the female inflatables in 12:28.22. First SUP was Fred, who narrowly won the last day but protested Dirk for drafting (apparently he spent 10k on the way back refusing to budge from the tail!) so Jo H-V had no option but to disqualify the Belgian. First craft on the 2-day was K1 Steven, while Will claimed 2nd SUP and my Dutch friend Martyn therefore took 3rd hardboard SUP. See full results here. Then last weekend, Jo published the adjusted timings based on the Australian Institute of Sport handicap system (taking craft, age and gender into account) – under which I’ve been named the Norfolk Ultra 2-day champion! Stoked… See handicap results here.

Next on the endurance scene it’s the Thames Ultra in a couple of weeks’ time. Meanwhile this weekend we’re back to the ‘short stuff’ with a 10k GB SUP race at Nottingham. Stay tuned to @SUPsect on Facebook to see how we get on.