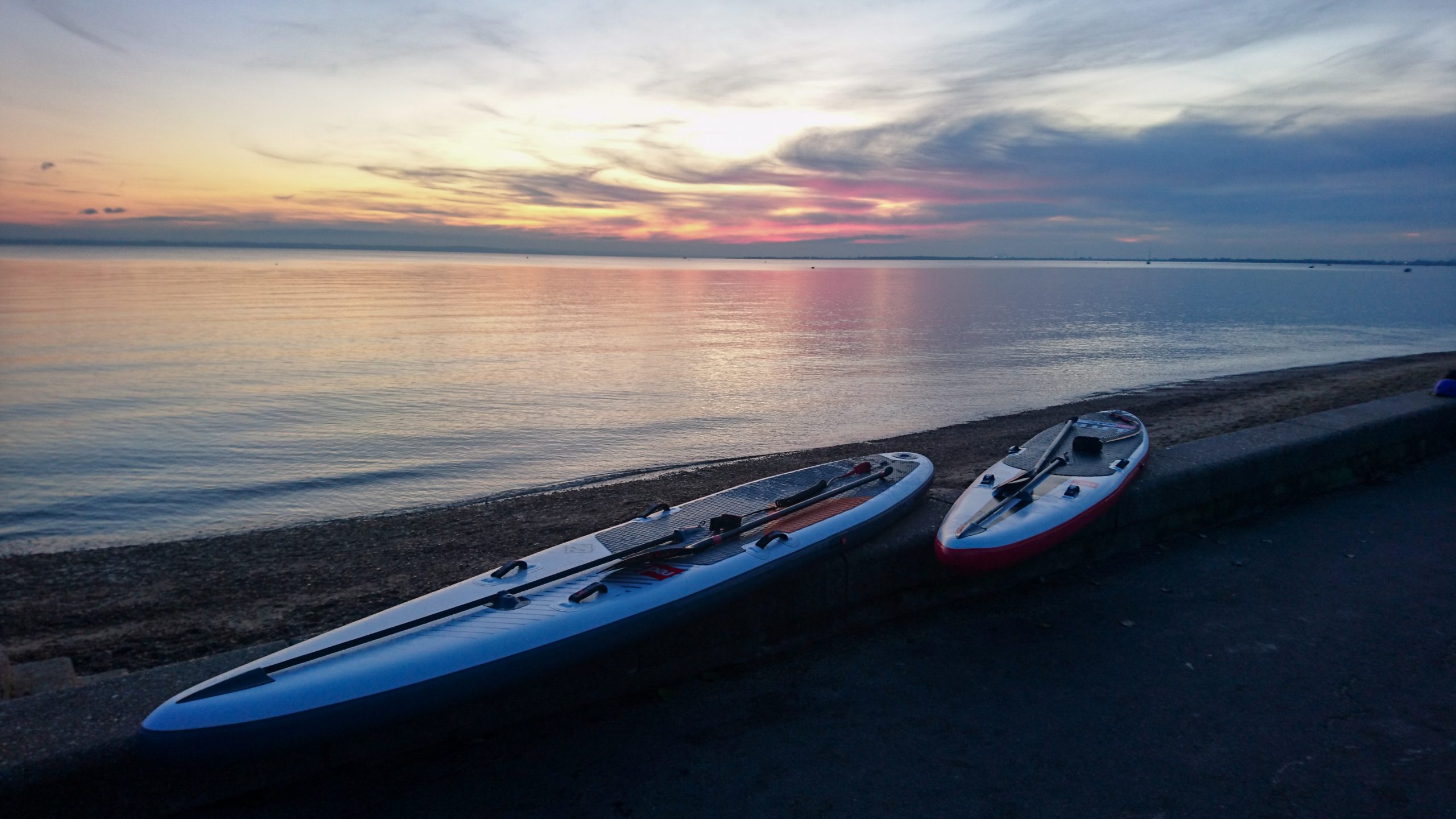 Is it OK to go paddleboarding again?

Following the Government’s imminent easing of the so-called ‘lockdown’, with new guidance that people can “exercise outside as many times each day as they wish” from Wednesday 13th May, it’s looking like we could be back on the water very soon. But while p27 of ‘Our Plan To Rebuild: The UK Government’s COVID-19 recovery strategy‘ seems pretty clear on the matter, with so many other agencies and associations involved in our access to the water, things might not prove quite so straightforward…

[Please scroll down for updated details on Tuesday 12th and Wednesday 13th May, below – as the situation is now much clearer!]

At the time of writing – Monday 11th May – it’s still definitely not acceptable to go out paddleboarding right now. The Government’s new Covid-19 guidelines won’t come into effect until Wednesday, so as things stand the waters that we usually paddle on are essentially closed – up on the River Chelmer the governing Inland Waterways Association and Environment Agency have effectively banned paddling on the Chelmer & Blackwater Navigation, on the tidal Thames the Port of London Authority (who legislate west of the Crowstone at Chalkwell) are also enforcing a bar on recreational water use, similarly on the Rivers Crouch and Roach the Crouch Harbour Authority have a ban in place, whilst outside of the estuaries the RNLI and Maritime & Coastguard Agency have both been appealing for everyone to stay ashore. We await updates from these various organisations as to whether they will permit launching from Wednesday onwards. So that’s the situation this minute, but no problem as it’s way too windy for paddling right now anyway!

The big question is, will it be OK to go paddleboarding on Wednesday? Well, subject to the above, it’s looking like the answer could well be a yes… Reading the new Government guidance, it should be fine to paddle either with members of your own household (as close as you like!) or with one person from outside your household (maintaining that now-familiar 2m ‘social distance’). The pertinent paragraphs of the Covid-19 guidelines are as follow:

“People may exercise outside as many times each day as they wish. For example, this would include angling and tennis. You will still not be able to use areas like playgrounds, outdoor gyms or ticketed outdoor leisure venues, where there is a higher risk of close contact and touching surfaces. You can only exercise with up to one person from outside your household – this means you should not play team sports, except with members of your own household.
“People may drive to outdoor open spaces irrespective of distance, so long as they respect social distancing guidance while they are there, because this does not involve contact with people outside your household.”

This news has already been well received by two of the biggest watersport national governing bodies – the RYA (Royal Yachting Association) and British Canoeing. The latter state that: “The easing of lockdown measures in England announced yesterday, have paved the way for paddling to start again in England from Wednesday 13 May, so long as government guidelines around social distancing are followed and the waterways authorities have opened up their waterways.” British Canoeing promise to update their guidance by Wednesday, after consultation with other national agencies, but they sound pretty positive in their statement here. Plus, with seemingly little hesitation after Boris’s speech last night, the RYA “warmly welcomes a return to the water” on Wednesday when: “unlimited outdoor activity will be permitted in England, and we understand that this will include all forms of boating” – check out their full statement here… Meanwhile British Rowing are sticking to their previously published advice for rowers to stay ashore until their COVID-19 Situational Review Group has met with waterway authorities, when they promise to update their advice ASAP after a meeting tomorrow (12th May). Similarly, while not an official national governing body, BSUPA have this morning emailed their members to reiterate their current advice that all centres remain closed and SUP is not advised for anyone – however, their email already seems to have been superseded by the official government advice, so doubtless BSUPA will update their position in the coming week.

[Edit 1: 14:00, Tuesday 12th May]
Another NGB, Surfing England, has now released sensible guidance for those that choose to hit the water from Wednesday – much of which is perfectly relevant to coastal SUP around here in Essex (and further afield, especially in surf – although we really wouldn’t recommend travelling to find a wave quite yet!) As far as they’re concerned, it’s obviously game on, so they have suggested some sensible best practice guidance – we particularly like “…smile, be kind & surf safe”. See the full Surfing England guidance here. Plus we hear that launching will be allowed from Wednesday on the Chelmer & Blackwater Navigation, which is in line with their published visitor information that “Essex Waterways has not imposed any additional restrictions beyond those put in place by Government”.

[Edit 2: 20;00, Tuesday 12th May]
British Canoeing have now released a full response to the Covid-19 update, and their new paddling guidance – ‘A return to paddling in England’ – recommends some sensible guidelines “in promoting a return to paddling” from tomorrow. Most notably, their “strong advice is that paddlers should paddle locally if possible”, which certainly seems wise… British Rowing have also updated their conclusions here – rowing clubs are understandably staying closed, but they deem individual rowing “possible” from public launches. Both NGBs note that the Port of London Authority‘s restrictions are technically still in place, although they expect that to change later this week. Meanwhile the RNLI have also responded, in a press release entitled ‘RNLI urges people to take extra care following changes to Government guidance’ accepting that watersports will be taking place from tomorrow, but basically encouraging people to act responsibly and look after themselves. We’d echo that – and suggest more than ever that everyone takes a good look at the weather forecast before they consider heading out; it’s looking pretty windy this next couple of days!

[Edit 3: 15:30, Wednesday 13th May]
Just in time, BSUPA have today updated their Covid-19 response, proclaiming that “today is the first official day that Stand Up Paddle Boarders in England are encouraged to get back on the water…” along with some handy pictorial safety guidelines. We’re also pleased to see that the Port of London Authority have today announced that “…the Thames is suitable for undertaking recreational activity, in line with new Government guidance.” See their full announcement here. Plus we’ve just had confirmation from the Crouch Harbour Authority that they are now allowing recreational launching onto the tidal Rivers Crouch and Roach (although they haven’t yet had the opportunity / manpower to update their website yet!) And in case there were any doubts left, the Government have clarified what is allowed at www.gov.uk/…/news/coronavirus-guidance-on-access-to-green-s… which explicitly includes us! “…all forms of water sports practiced on open waterways, including sailing, windsurfing, canoeing, rowing, kayaking, surfing, paddle-boarding and the use of privately-owned motorised craft (in line with the guidance issued by the relevant navigation authority) are allowed.” Which means, by our count, that every agency and association involved with water access around our part of Essex have now given the green light to go paddleboarding. Every one of them agrees though that we must follow social distancing guidelines (so only go out alone or in pairs, try to keep away from crowded spots / times, and don’t hang around at the launch) and that we should be particularly careful (so double-check the weather, tides, kit, conditions etc…) The overall advice is that we should still stay at home whenever possible – but we are now allowed outdoors for as much exercise as we like. So whatever you choose to do, enjoy and be nice to your fellow humans out there…

So, practically, what’s this going to mean for us? Certainly there’s no chance of a return to SUP Club or SUP School anytime soon – to be fair we’d expected that’s going to be a long while yet. But on the plus side (and subject to all of the above!) there is a very very good chance that it will be perfectly OK to finally, individually, get out for a paddle from the end of this week. There are of course two major caveats – that we all act responsibly and maintain our ‘social distance’. Most importantly that means either paddle with someone you live with, by yourself, or if you must have company (and it’s fair to say that SUP is safer in company) then paddle with just one other person from outside your household. Please please don’t be tempted to go out in groups of three or more as it remains totally unacceptable and will risk giving the sport a very bad name – for the time being SUP still can’t be social, but getting out on the water can be good exercise and great for the soul. Another facet of acting responsibly is paddling safely – now more than ever, check and double-check the weather and tides, don’t paddle too far offshore or in conditions you can’t handle, be careful and look after yourself as it’s definitely not a good time to risk burdening the emergency services. The other problem we anticipate is crowding: as the weather and tides are the same for everyone we do risk gathering at the same few places at very similar times. To reduce this effect, we’d suggest that you try and get out at spots and times that you expect to be less busy (ie; not Chalkwell Beach or Paper Mill Lock on a sunny Saturday afternoon!) Maybe early morning, late evening, or when it’s a little cooler, cloudier, or even raining? And try not to hang around at the launch before and/or after you hit the water – get there, get out, paddle, get back, go home!

Of course, we’re still not completely sure of anything and things could well change yet – but we will try to update here and on our Facebook page @SUPsectUK as everything becomes clearer…